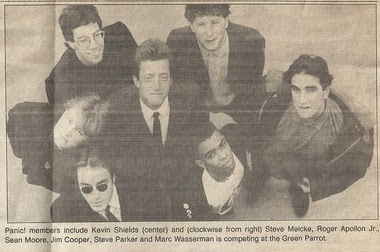 Hopefully if you are a fairly regular reader of this blog you know that I love ska music in all its combinations and permutations. My passion for the music started when I heard The Specials first album as an impressionable 14 year old. From that defining experience I was off and running. Album shopping and seeing ska shows in New York City filled my teens years.  It finally led me to start a band 22 years ago in New Brunswick, New Jersey while I was attending Rutgers University. There I met a group of like-minded souls and misfits and together we embarked on a musical journey that continues to this day.

The New York Ska scene was in full effect in the late 1980's when we started and to the best of my knowledge we were the very first ska band to come from New Jersey (which for those of you living in the UK is the equivalent of being from Essex compared to London). Initially we called ourselves Panic! (after The Smiths song -- see the picture above) which was later changed to Bigger Thomas (after the main character of the Richard Wright novel 'Native Son') and to our astonishment and surprise we quickly built up a fan base in the New York/New Jersey music scene. Soon we were sharing stages with more and more well-known bands and playing further and further from home. We have certainly had our ups and downs, but that has made the whole experience more interesting. I consider all my band mates (past and present) the brothers I never had and a musical family who have made my life what it is today.

In honor of our 22nd anniversary together, all the current and original members of the band are coming together this Saturday December 18th (for the first time since we played our last show in 1991) to play a benefit show for the club where we played one of our very first shows together in 1988 and which has always served as our spiritual home -- The Court Tavern in New Brunswick, NJ. 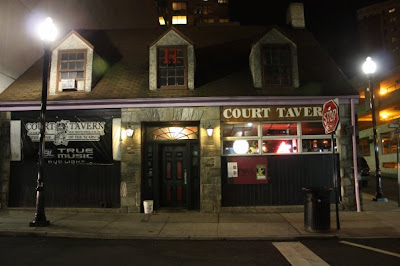 The Court Tavern remains key in the history of our band and the history of music in New Jersey. New Brunswick was once filled with rock clubs. But now most of them — the Melody Bar, the Roxy, the Corner Tavern — are gone, or no longer presenting live music. Over the years, the club which started booking bands in 1981 and helped launch Jersey bands like Bouncing Souls, Screaming Females and the Gaslight Anthem, and hosted touring acts such as the Flaming Lips, the Replacements and Henry Rollins. However the club has struggled financially the last few years. There is no shortage of reasons why the Court Tavern, and other clubs, have found it hard to survive. The raising of the drinking age and countless other distractions — cable TV, video games, the Internet — that didn’t exist, or weren’t much of a factor, in 1981. The proliferation of big shows at stadiums, arenas, amphitheaters and theaters, also slowly took business away from the club. Despite these challenges, The Court Tavern still presents live music four or five nights most weeks. And for that reason alone we are thankful.

So, if you live in the New York/New Jersey metro area, I hope you will consider coming out to see us play this Saturday (along with two of New Jersey's finest ska bands -- Hub City Stompers and Silver Dollar) and lend a hand (and a few bucks) to help keep the Court Tavern open. In honor of the club and our allegiance to it, below are ultra rare videos of our band playing songs from our very first show at the Court Tavern in front of a very drunk and rowdy crowd in October of 1988. The songs include 'American Dream' and 'Suffering From A Lack Of Dub' which were staples of our set during our first year together. The original line-in the video up includes:


The original line-up (minus Ken Gayle and with Sean Moore on trumpet) recorded the self-titled album below which contains many of the songs we still perform to this day. Its available below from Amazon.com: