Unsung Bands Of The 2-Tone Era - The Mob: 9-Piece Coventry Ska Band Record A Tribute To Their Hometown 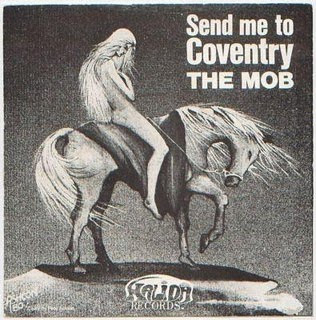 Part of the joy of blogging about music is the process of discovering a band or song that may have been buried or forgotten by time. I liken the search and discovery to a form of musical archaeology. Its even more gratifying when you come across something totally unexpected, which suddenly captures a time and place so definitively that you are immediately transported back there just by listening. I'm a nostalgia junkie and I'm forever looking for bands and sounds that bring me back to the time I first discovered ska, punk and new wave in the early 80's.

Thanks to both Tone & Wave ska blog and Pete Chambers (noted Coventry music writer and the driving force behind the new 2-Tone Central Museum) I recently came across a 7" single titled 'Send Me To Coventry' by The Mob recorded in 1979 that awakened that excitement in me again.  In the wake of the 2-Tone explosion, the story of The Mob is one that happened all across the U.K. In this case, the band -- made up of nine established rock musicians, including a member of noted 60's rock band Badfinger --  was actually based in the epicenter of Coventry.  Despite its rather blatant attempt to jump on the 2-Tone bandwagon, it’s a song that really has no right to be so catchy. With lyrics such as, 'I can see no naked lady, riding on her horse now' (referencing Lady Godiva who is an icon in Coventry) and, 'C-O-V-E-N try our new horizon', its a great guilty pleasure.

I had the good fortune to connect with The Mob's drummer Jim Pryal who shared more about the story behind the band as well as his experiences later playing with popular Coventry-based ska and reggae-influenced band Hot Snacks, who often toured with 2-Tone bands but never scored a record deal.

Where did you grow up and what bands or music influenced you the most?
I grew up in Coventry- at the time, a major industrial city in the centre of England. I was always interested in pop music and like millions of teenagers in the early 60s, I became obsessed with The Beatles and particularly, John Lennon. There’s too much music to list that has influenced me from early Shadows, blues, soul through pop, rock, progressive on to 80s and 90s- electronic music, dance and club music. I appreciate any performance that has feeling including current club and dance styles.

What was the Coventry music scene of the mid to late 70's like?
At the time 2 Tone started in the late 70s, the local scene was mostly cover bands playing bars and clubs. There weren’t many original bands.

Were you a fan of ska an reggae before you joined The Mob?
I was a fan of early ska in the mid 60s, mod era in the UK. Artists like Desmond Dekker, Prince Buster and Dave and Ansell Collins had put ska on the map in UK. It was in about 1978 that I became aware of reggae with the release of Bob Marley’s ‘Catch a Fire’. 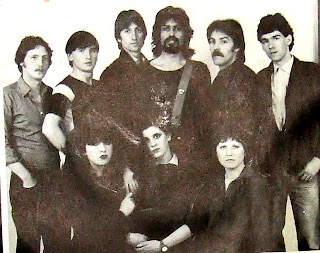 (Thanks to Jim Pryal for the picture of The Mob - That's him 2nd from the right on the top)
How did you end up joining The Mob? For those who may not be familiar with the band can you tell us a bit about how the band was formed and who some of the members were?
At the time of the 2-Tone explosion, I was drummer in a Coventry rock band Stiletto, doing mainly covers and playing bars and clubs. The bass player, Arun Bhandari had written several songs and the band was always experimenting with different beats and rhythms to try and come up with something original. Arun already had the idea of ‘Send me to Coventry’ so we booked studio time and drafted in other musicians – keyboard player Bob Jackson of Badfinger fame and a sax player who’s name I cannot remember and some backing singers.

Was it an attempt to jump on the 2-Tone band wagon sound?
It was a one off and a definite attempt at jumping on the bandwagon.

Tell me about recording the rare 45-rpm single, 'Send Me To Coventry. What kind of reaction did the single get when it was released?
We recorded it and had 1,000 copies pressed. Although the local radio station made it their record of the week, we couldn't get any other interest with it. I heard recently that it sells in Japan and I’m trying to find out what happened to all the copies! 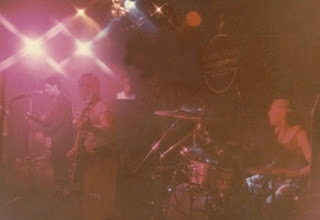 (Thanks to Jim Pryal for the picture of Hot Snacks - That's him on the drums)
Most new bands in Coventry at that time were all trying to get signed and nearly all had some kind of ska influence.We were an exciting live band and had a good following. We got offered support slots with The Specials and The Selecter and did a nationwide tour with Bad Manners in the winter of 1980.  We got signed by Carlin Music Corporation and recorded several demos but for one reason or another, we could not get a single out and disbanded after 4 years of frustration.

Below is video of Hot Snacks performing the song 'Character Change'. The band featured The Specials original drummer Silverton Hutchinson who was replaced by Jim Pryal.

What are you up to musically these days?
At this moment, I write and produce in my home studio and recently collaborated with a young Coventry vocalist Danielle (here is a You Tube link to the song). I have another live project starting up next year, so I’m looking forward to that.

If you are a fan of 2-Tone era ska or enjoy hearing bands who were active during those years then have a listen to The Mob. Thanks again to Jim Pryal for taking time to answer my questions and to Tone and Wave blog for introducing me to The Mob and for sourcing the 7" single.

The Mob - Send Me To Coventry/Mobbed

Hot Snacks - Baby Elephant Walk
Posted by Marco On The Bass at 10:14 AM

Iused to roadie for Hot Snacks they were a fantastic innovative band,and yes I nremember being at the Three Tuns and The Navigation,and also a gig to save The Drill Hall where a certain Jerry Dammers was in the audience taking notes particularly the ethereal opening set music ,swiftly afterwards Ghost Town was released.Happy days .