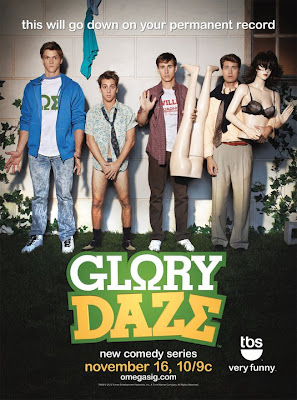 Glory Daze is a relatively new television show broadcast here in the U.S. on the TBS cable network. Set in 1986, it centers on a group of four college freshman and their misadventures trying to navigate college life.  The show seems to be a pastiche of every 80's movie you have ever seen, which isn't necessarily a bad thing.

While the show has received mostly mixed reviews since airing in November, I have been impressed with the quality of 80's music incorporated into each episode of the program. Indeed, the episode broadcast last week titled 'I Ram (So Far Away)' centers on the four main characters trying to get tickets to see a concert by General Public. It features five classic songs by both The English Beat and General Public including:

I also noticed that the DJ featured in the beginning of the episode is none other than Richard Blade, a popular Los Angeles radio, television, and film personality originally from Torquay, England. He is best known as a host on KROQ-FM in Los Angeles and for his current gig hosting a New Wave show on Sirius XM Satellite Radio.

You can watch the English Bear/General Public episode at the link below:

I adore this show and I truly think its because of the music! I love the 80's for the music. Sadly, the season has ended and I hope it gets picked up for another season. Next season, I will be watching with a pen and pad so I can jot down the songs I hear. Every episode, I'd recognize a song I had not heard in years but forgot about the song...