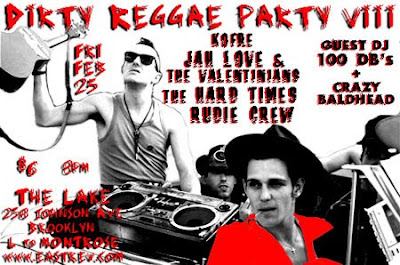 Here is a heads-up to anyone looking to experience the burgeoning Brooklyn ska and reggae scene: Dirty Reggae Party VIII is this Friday February 25th at The Lake in Brooklyn, New York.

Like most shows at The Lake (an underground club in the Bushwick section of Brooklyn (read a great review of what its like to see a show there from the Duff Guide To Ska) the line-up features a diverse mix of the New York City ska and reggae scene including: the Latin ska of Kofre; Jah Love & The Valentinians (a super group featuring Jah Point and members of The Slackers, The Hard Times and The Forthrights) performing Lover's Rock classics; the soulful rocksteady/skinhead reggae of The Hard Times (with guest vocalist Elizabeth Goffe who wowed the crowd at the Punky Reggae Fest in January) and old school NYC Ska favorites the Rudie Crew. There will also be DJ sets by 100 DB's (who is The Slackers tour DJ) and Crazy Baldhead Sound System (featuring Agent Jay of The Slackers, Jah Point, Rata & co.)

I'm particularly excited to see the Rudie Crew featuring lead vocalist Roy Radics (who often toasts with my band Bigger Thomas) because they will be previewing songs from their upcoming Megalith Records release 'Skragga'.  The band have been mainstays of the New York Ska scene for many years with members who played in The Boilers, The Beat Brigade and later Skinnerbox and Stubborn All-Stars and their new record should help spread their inspired sounds to a much wider audience beyond New York City where they tend to play most of their shows.  True to its title, 'Skragga' is a great mix of 2-Tone and 70's and 80's British-style reggae (particularly early UB40, Aswad and Steel Pulse which Radics and saxophonist El Hussey listened to growing up in North London). Add Radics' patented ragga-style chatting and toasting on top and you have a classic in the making.

The band shared a few promotional tracks from the album with me which can be streamed below.  The first track 'Propaganda' is already a live favorite featuring a great hook courtesy of the band's horn section of Hussey, trumpeter Dan Dulin and trombonist Chris Malone. I'm also a big fan of 'S.U.V.' which takes the owners of the gas guzzling vehicles to task for all the pollution they spew around New York City.

Below are videos of all the bands performing this Friday.  First up are headliners the Rudie Crew performing another new track from 'Skragga' titled 'Tottenham Flow' which is a reggae anthem dedicated to all the footballers who have suited up for Tottenham Hotspur (Roy Radics is a rabid Spurs fan.)

The Hard Times with Elizabeth Goffe perform a smoking version of Max Romeo's 'Chase The Devil':

Here are the show details:

For more info: visit: www.eastrev.com
Posted by Marco On The Bass at 9:25 PM

Can't wait! It's going to be an incredible night of music!