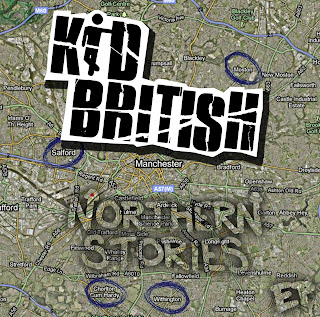 I am very happy to report that Manchester ska pop seven piece Kid British are back!  The band are offering a four song EP titled 'Northern Stories' for free as a way of giving something back to fans who have stuck by the band during a long break between the release of their first EP 'It Was This Or Football' in July 2009 and their debut long player out sometime later this year. I've always believed that the band has a lot of potential to pick up the torch for British ska and while they mix up a variety of influences including ska, pop, indie rock and hip-hop, its clear that they are fans of 2-Tone era music including The Specials, Madness and UB40 (who they toured the U.K. with late last fall).

The band, who recently finished recording the new album, have released the EP as a free download featuring four tracks which won't be included on the debut long player.  Three of the four songs - 'Northern Quarter', 'Tib Street' and 'Piccadilly Gardens' - are named after Manchester areas while the fourth is titled 'Bookies'. Each song has a distinct sound from upbeat indie ska to reggae to an acoustic track and they all touch on real stories the band and their fans are experiencing on a daily basis. Like Madness and The Specials, who they take song writing inspiration from, the band is writing about what they see around them. Fans can download the EP and artwork here:

In conjunction with the free release, the band has also distributed a nearly 15 minute 'web-zine' interview with music journalist John Robb:

Kid British have three shows booked for early May as a lead in to the launch of their new album which they are providing a sneak preview of on Soundcloud.
Posted by Marco On The Bass at 2:32 PM

Beat me to the punch! I'll still do a post with my own spin on things!

Definitely interested in the Duff take on the new KB tracks.