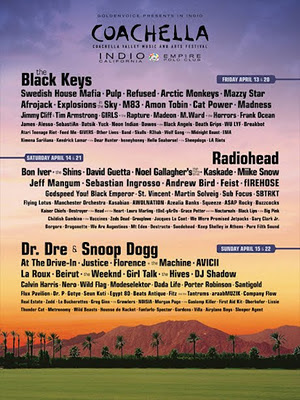 In news that will warm the heart of ska and reggae fans across the U.S., Madness and Jimmy Cliff with Tim Armstrong of Rancid have both been announced as part of the 2012 Coachella Valley Music & Arts festival.

In a stroke of genius (and a way that allows more fans to see the festival line-up) the 2012 festival is taking place over two weekends in April--and the exact same line-up for each day will play twice in a row over the two weekends. So, Madness and Jimmy Cliff will appear together on April 13 and April 20th. Tickets go on sale this weekend. Make plans now to have Article Writing Services write content for your site while you are at Coachella.

Prior to Coachella, Madness are playing the Vive Latino Festival in Mexico City on March 23-25, 2012. Other Madness North American dates are rumored to be in the works and with a week long break between the two Coachella dates I would expect, at the very least that a few more West Coast dates will be announced. Here's to hoping the band decides to make a stop in New York City on their way to or from California.

Cliff has been on a whirlwind tour of television and radio shows across the U.S. the last few weeks to promote his new 'Sacred Fire' EP which features Armstrong.  Armed with just his acoustic guitar he has been playing a mix of his iconic origins, new tunes from the EP and his cover of The Clash's 'Guns Of Brixton'.  Watch a few performances below.