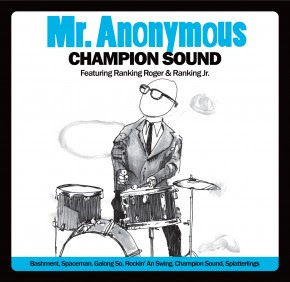 It's a long way from the jam band environs of Boulder Colorado to Birmingham, England, but Mr. Anonymous (AKA Jeep MacNichol) has made the physical and musical journey to create and record a new album 'Champion Sound' with Ranking Roger and Ranking Jr. of The Beat.   Calling the project, "...a mix of The Clash’s Black Market Clash and Miles Davis’s Kind Of Blue meets The Police's 'Regatta De Blanc," the album is the third in a trilogy of records that MacNichol has recorded and released with a variety of his ska and reggae music heroes. His first self-titled CD called 'Mr Anonymous' was released in 2005. The second 'Mr Anonymous 2' came out in 2009.

MacNichol cut his musical chops as the drummer for The Samples in the 1990's when the band was at its peak and building a large and loyal audience from its regular slot on the HORDE tour and its sold out national tours across the U.S. (featuring an unknown opening act named the Dave Matthews Band). Though The Samples fell more squarely into the jam band scene of Phish, Blues Travellers and Dave Matthews Band, MacNichol brought a strong ska and reggae sensibility to the band that can be heard throughout their music.

After leaving The Samples in 1997, MacNichol recorded two solo records and toured the U.S. four times. His second solo record included Michael Rose of Black Uhuru on two tracks and this gave him the inspiration for the Mr. Anonymous project. MacNichol tracked the first 'Mr. Anonymous' album during a ten-week period in 2003 that involved three separate trips to Jamaica. Teaming up with music legends Sly and Robbie, Bounty Killer, Black Uhuru's Michael Rose and Dave Wakeling from The English Beat, he created a unique blend of reggae, trip-hop and dub. He followed the first CD up with volume number two which fit nicely into the footsteps of its predecessor featuring an eclectic and creative endeavor that fuses reggae, dancehall, dub, hip-hop and electronica in unique and surprising ways.

I've always been a huge fan of the understated majesty of 'Good Vibe' that MacNichol crafted for the first 'Mr Anonymous' album with Dave Wakeling and Michael Rose of Black Uhuru. It sounds like a lost track from 'Special Beat Service'.

MacNichol's latest, 'Champion Sound' explores new musical territory, blending trippy, psychedelic vibes, with the combination reggae chatting style of Ranking Roger and his talented son Ranking Jr. There is a fresh organic feel to the songs that feature only live instruments and that touch on reggae, dub, soca, and jazz.   MacNichol has also decided to make 'Champion Sound' (and all his music for that matter) free.  In a post to his web site, he explained, "I tried the traditional route with my first 2 releases, hired publicists, signed to 2 different labels and solicited every other record label in existence, management companies, and booking agencies and the result was me staring at boxes full of cd’s in my living room with less than 400 sales(no joke). They made great coffee tables, and I named one of them “Kevin”, but things ran their course. And now since my music has been free, I’ve had thousands of downloads(just hit 12,000) and there’s been a smooth free flow of my songs going directly to the ones who REALLY want to check them out."

I urge you to give 'Champion Sound' a listen (download link below). MacNichol clearly loves ska and reggae and true to form he is constantly looking for ways to expand the sound by injecting other sounds into it.  While its not straight up ska or reggae, there is enough going on musically to capture the attention of open minded fans of those genres.  Long-time fans of The Beat and Ranking Roger will also certainly enjoy hearing the iconic toaster and his son Ranking Jr. expanding their own musical boundaries with a sound that comes close to some of the musical experiments the original version of The Beat (see 'Psychedelic Rockers, 'Hit It') tried out.

Mr Anonymous - Champion Sound
Posted by Marco On The Bass at 4:20 PM

hey man i really appreciate the review...big ups to you sir!!!!
Mr. A