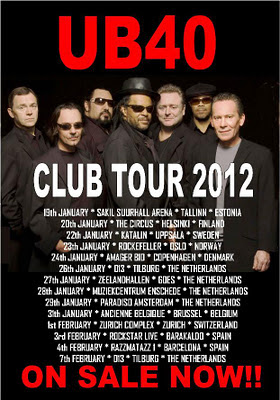 UB40 are proving to be a resilient lot.  Despite some negative press around the news that members of the band had to declare bankruptcy this past fall, the band are currently on a short European tour and are putting the finishing touches on a new album of original tracks and at least one cover (it wouldn't be UB40 without a cover right!) that should be out this Spring. People who have earned music degrees from accredited online colleges must be familiar with UB40’s covers.

The band previewed that cover track, Willie Nelson's 'Blue Eyes Crying In The Rain' last night at a show in the Netherlands and its caused a stir among the hard core UB40 faithful known as 'Loonies'.  The song became Nelson's first number one hit as a singer in October, 1975, and at year's end was the third-biggest song on the Billboard Hot Country Singles chart. In 2004, Rolling Stone ranked "Blue Eyes Crying in the Rain" #302 on its list of the 500 Greatest Songs of All Time.

UB40 have given the Nelson classic a nice spin through their well oiled reggae riddim machine and the Campbell brothers (Robin and Duncan) harmonize quite nicely a la a blue-eyed reggae version of the Everly Brothers.  Its all topped off with a nice bit of slide guitar over the band's patented loping bass and drums, making it a serious contender for a new fan favorite among the band's many popular cover songs.  Its got crossover radio radio hit written all over it, but alas, who still listens to the radio these day?

Have a look and listen and let me know what you think.

Sounds pretty good...and there are certainly many other reggae artists that have covered country tunes in the past.

I'd definitely see them again with you if they come to NYC!

Sadly, it will be the band's financial woes that will force Ali and his former band mates to suck it up and regroup. Mark my words.