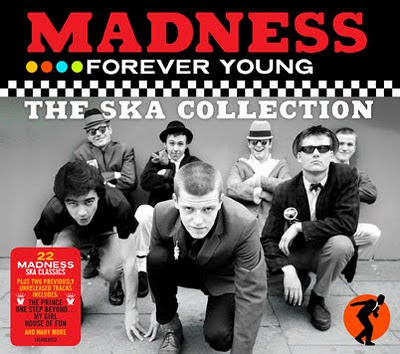 In what is likely a teaser for the long awaited announcement of U.S. tour dates this spring,  Madness has announced an early April release date for 'Forever Young - The Ska Collection'.  The 24 track album will feature ska and ska influenced tracks from across the band's entire massive catalog, with an emphasis on many of their classic Nutty Boy anthems ‘Baggy Trousers’, ‘One Step Beyond…’, ‘Night Boat To Cairo’, ‘The Prince’, ‘Swan Lake’ and many more.

While Madness branched out from their initial embrace of ska to become a massive mainstream pop act and the most successful singles band of the ‘80s, they have always kept ska close to their hearts (e.g., see Suggs solo singles and Lee Thompson's Ska Orchestra) the genre can be heard on every single one of their studio albums including their most recent, ‘The Liberty Of Norton Folgate’.

Of particular interest to hard core fans will be the inclusion of two previously unreleased tracks; a cover of Jimmy Cliff’s ‘Vietnam’ and a rollicking version of Edvard Grieg’s ‘In The Hall Of The Mountain King’.  As a bonus, the album includes a special fold-out poster booklet and liner notes featuring new interviews with Chrissy Boy and Lee Thompson.
Posted by Marco On The Bass at 2:37 PM