Radiation Across The Nation!: Roddy 'Radiation' Byers of The Specials To Tour U.S. 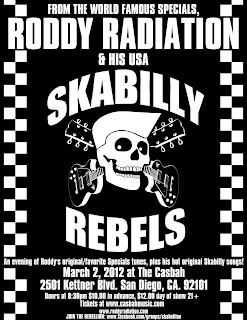 If you missed The Specials during their quick stops in New York, Los Angeles and Toronto during their 2010 tour, I have some great news for you! Roddy 'Radiation' Byers, the iconic lead guitarist of the Specials and the songwriter of 'Concrete Jungle,' 'Rat Race,' and 'Hey Little Rich Girl,' has just announced a limited engagement 'Rebellion America Tour' of California and the Southwestern U.S. this February and March. He will be backed by an American version of his band, the Skabilly Rebels, that will feature Danny Dean of The Homewreckers.

Byers is slated to play a total of 12 shows on this leg of the tour, that will feature a mix of his favorite tunes by The Specials and many of his own songs written for The Skabilly Rebels, that showcase the ska/punk/rockabilly sound he invented with The Specials. The tour kicks off on February 23rd, 2012 and will go until March 11th, 2012. More dates and venues will be announced this week, and will include stops across California, Reno and Phoenix. Rumors are that Byers may plan to hit the East Coast of the U.S. later this year.

Tickets are on sale right now for shows on March 2nd at The Casbah in San Diego, March 3rd at the Tiki Bar in Costa Mesa, and March 8th at The Mint in Los Angeles. Fans can receive up to the minute tour date information at www.roddyradiation.com.
Posted by Marco On The Bass at 11:12 AM

Obviously, we have to see him if he comes to NYC...

That can be arranged...we're working on East Coast dates next.