The Story Behind "One In Ten" By UB40: A Reminder Of "A World That Doesn't Care" 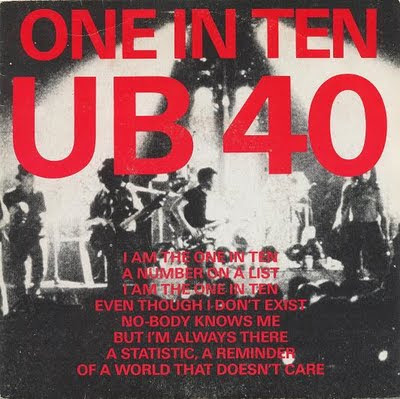 It was almost exactly 31 years ago on July 30, 1981, that UB40 released one of their most memorable and iconic songs of all time -- the single "One In Ten." Set to a chugging reggae beat with a mournful sax riff, the song ranks with "Stand Down Margaret" by The Beat and "Shipbuilding" by Elvis Costello as among the best political protest songs of all time.

Though it never directly names her, "One In Ten" directly challenges Margaret Thatcher and her Conservative government's policies of the 1980s. At the time of the song’s release (and sadly much like 2012), Britons were enduring  great economic turmoil, a widening gap between the wealthy and the poor and racial riots that underscored the failure of England to integrate a growing Black British and Asian community.  As such, Thatcherism (like the current Con-Dem government) seemed to reflect a part of society that did not care for those suffering the most.

Thatcher summed up her personal and political view that there was "no such thing as society. There are individual men and women, and there are families." It was a shocking reversal of the idea of the welfare state and safety net for the neediest members of a society, but rather dog eat dog, and every man for himself.


"I think we've been through a period where too many people have been given to understand that if they have a problem, it's the government's job to cope with it. 'I have a problem, I'll get a grant.' 'I'm homeless, the government must house me.' They're casting their problem on society. And, you know, there is no such thing as society. There are individual men and women, and there are families. And no government can do anything except through people, and people must look to themselves first. It's our duty to look after ourselves and then, also to look after our neighbour. People have got the entitlements too much in mind, without the obligations. There's no such thing as entitlement, unless someone has first met an obligation."

In pointed response, “One in Ten” succinctly voiced the pain of millions, as they struggled to survive Thatcherism, referring to those who were unemployed, starving, suicidal and homeless as a “statistical reminder of a world that doesn’t care.” The lyrics call out the “dole queue”, malnutrition ("malnutrition dulls my hair”), drug addiction (”I’m a housewife hooked on Valium”) and poverty (“beggar(s) on the corner”).  A line that has always had a particular impact on me is: “I’m the murderer and the victim”, suggesting that those who turned to crime and violence were doing so because of the rising need to survive and express their frustration at the growing poverty.

Margaret Thatcher's economic reforms made Britain wealthier at the expense of millions who lost their jobs, their homes and their livelihood. Thankfully, UB40 carried the torch for those that Thatcherism and the world were all too content to leave behind.
Posted by Marco On The Bass at 12:03 PM

A song that must be heard. I'm 48yrs old and still find listening to the words deeply moving. Shame on the greedy, the arrogant and the liars in our world. Is there any hope left?

Such bollocks. This is a great song and is UB40s best ever. I suspect Brian Travers wrote the Dylanesque diatribe to Thatcher's 80's hellish UK.