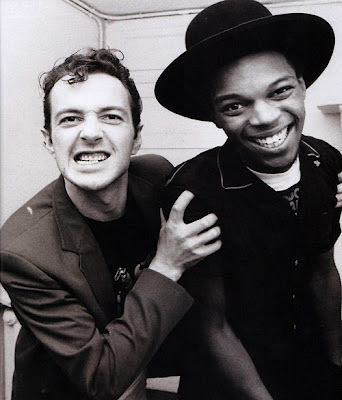 In September 1981, the Clash played a legendary seven-night residency at the Theatre Mogador in Paris (read an amazing article from The Guardian about this series of shows and the influence they had on a whole generation of young French musicians). This was the post-Sandinista!, pre-Combat Rock, version of the band – the one that was obsessed with dub reggae, funk, hip-hop and Latin America. Joining them on the bill was The Beat! Talk about an amazing show!

Joe Strummer and Mick Jones of The Clash admired Ranking Roger so much that they invited him to sit in with them each night of the European tour to toast along on their versions of Junior Murvin's "Police & Thieves" and Willie Williams' "Armagideon Time."  The sound is electric and you can hear the chemistry between The Clash and Ranking Roger as it unfolds in real time.

The friendships forged during these shows extended long after the tour ended. So when it came time for The Clash to record a new album in 1981-82, Jones contacted Ranking Roger and invited him to come toast on a few tracks. In case you didn't know, The Clash's iconic album "Combat Rock" was originally planned as a double album with the working title "Rat Patrol From Fort Bragg." Jones had mixed the first version by himself without input from his band mates.  His mix featured Ranking Roger on a version of "Rock The Casbah" that was never released.

Recently an amazing version of "Red Angel Dragnet" featuring Ranking Roger from the "Rat Patrol" sessions have surfaced.  In my opinion, the song is far superior to the final album version produced by Glyn Johns. Though neither of Roger's contributions made the final version of "Combat Rock," it cemented a friendship between Jones and Ranking Roger that has gone on to this day.

Give this a listen and play it loud!

Niiiiice! RR and the Clash! Never knew... thanks for this!