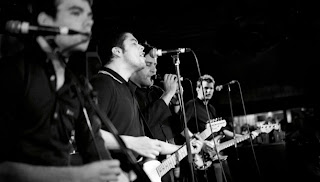 It's times like these that I truly miss The Dead 60's. Like many others, I have joined the guessing game about the support acts that will be opening shows for The Specials UK tour in a few months time. The recent announcement that Dub Pistols will play some of the London shows has heartened me a bit, but imagine what the shows could have been like if The Dead 6o's were still around to bring their inspired combination of dub and reggae infused rockabilly ska stylings ripe with organs, bass and drums and their angst-ridden vocals to the proceedings? My mind boggles at the thought.

The core of the band formed during their teens under the name Rest Home, a 5-piece pop-punk band which played cover versions alongside their own original material. Eventually stripping down to a 3-piece, they changed their name to Pinhole and their first release was the 4-track "122 Duke Street" EP (named after the address of Liverpool bar The Pit, where the band played many of its first shows). The Dead 60's eventually morphed out of this period and hit an incredibly creative period between 2005 to 2007 recording and promoting their self-titled album "The Dead 60's", a dub remix of their self-titled album and "Time To Take Sides" which was released shortly before they went their separate ways.

Even though the band is no longer with us, you can listen to an amazing bootleg of a live performance the band performed at the height of their powers in October 2005. The show was recorded as part of the Black Sessions which are live performances broadcast on the French Radio station France Inter. The Black Sessions are the brainchild of the well known French radio DJ Bernard Lenoir (Lenoir means black in English). Lenoir is a radio pioneer (the French John Peel), and the Black Sessions are high fidelity, live recordings for his show. Unlike the "Peel Sessions" the band's play live, in one take and in front of an audience of 200 people.

Here is video of the band performing a live dub version of "Too Much TV":

This 12-song recording of their live set gives you a sense of how tight and talented the band were and how they could have become the new face of ska in the 21st Century. It also brings home what a memorable combination a tour featuring The Dead 60's and The Specials could have been.

Just found your site for the second time this week. I really dig what you're doing, in fact, we have a little bit of overlap in our coverage.

I've been feeling nostalgic for the Dead 60's for a couple of months now. I'm so glad you linked me to this set.

Hey, Dead 60s are one of my favourite groups, I've never heard them play live - do you still have this gig to share? Rik

Just came across this, but sadly the link is down.
A re-up would be boss.

Hi Scouse Tony! Send me an email and I'll send you the d/l link.