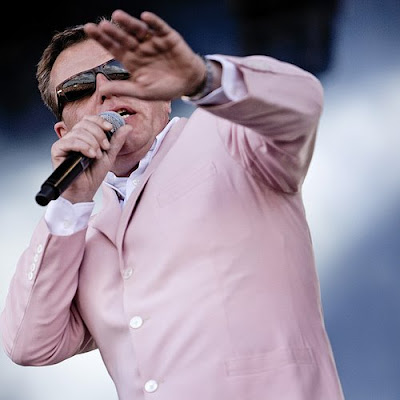 Madness kicked off the summer concert festival season at Pinkpop in The Netherlands in late May. The festival which was headlined by Bruce Springsteen, The Killers and Snow Patrol was stolen by the Nutty Boys who were a fan favorite. The band previewed the set fans can expect to hear at Madstock later this summer. Pinkpop is a 3 day festival and is one of the largest and most well known music festivals in all of Europe and is visited by approximately 60,000 people a day with performances on 3 separate stages. The band played a nearly one hour long concert that featured a mix of old classics and new songs from 'The Liberty Of Norton Folgate'. The band had last performed at Pinkpop in 1981.

I found a translated review of the Madness performance from the Dutch newspaper De Volkskrant:

Frontman Suggs of Madness showed some historical awareness as well. Unlike Springsteen, he spoke from his own experience. On Sunday, after the cracking openers 'One Step Beyond' and 'Embarrassment', the Madness frontman, clad in pink suit, said: 'Pinkpop! 1981 was the last time we played here, 247 years ago!'

Surprisingly, the best party to be had on Sunday was by Madness, in spite of some disappointing comebacks. Suddenly they were here again. The solid songs of their new album The Liberty of Norton Folgate settled in wonderfully between the string of celebratory ska hits from the eighties.

If we look back on Pinkpop’s golden jubilee, ten years from now, we will remember this: 2009 was the year of Springsteen and Madness. The other big acts on the poster were regulars (and thus lacking in character), or just not memorable enough.
Without Springsteen and Madness the jubilee edition would have been a weak one.

You can watch the entire Pinkpop set at the link below:

You can download the entire set from the links below:

does anyone has a tracklisting for the video?

Thanks for the video link, Marco. Great stuff!

Thanks for the video link, Marco. Great stuff!