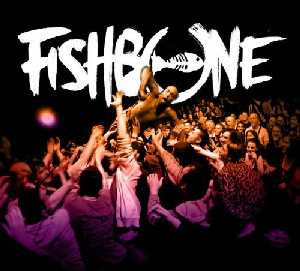 While The Specials and Madness both celebrate 30 years together with tours and new music, another band that helped to popularize ska here in the U.S. is also celebrating 30 years together in 2009. I don't even know what to say that hasn't already been said about Fishbone. They remain, hands down, one of the best live bands I have ever seen. I remember hearing their first record being played inside Tower Records in NYC in early 1985 when it was first released. I was a ska freak even back then and when I heard the first skanking chords from "Party At Ground Zero" blowing through the store's speakers I ran over to the counter and asked the clerk what was on the turntable. "Why Fishbone of course!," he replied. I bought the LP on the spot. They've been a favorite band ever since.

I had the good luck to see the band perform live at The Ritz on Halloween in 1985. The bill included 24-7 Spyz and The Red Hot Chilli Peppers. The Ritz was the epicenter of live music in New York City in the 1980s. An expansive, high ceilinged, two-tiered theatre, it was relatively perfect in every way and I saw many shows there including Bad Manners, the first General Public show in the US and this Fishbone show. It remains one of the best live shows I have ever seen. I recently had the good luck to discover two rare pictures of the band taken during the Halloween performance at The Ritz in 1985: 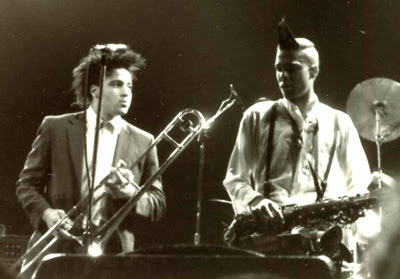 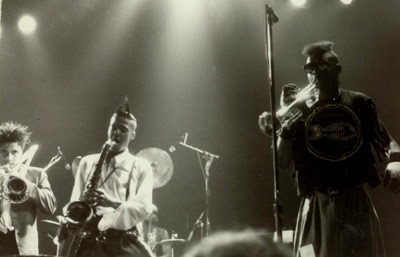 Thirty years after forming in South Central Los Angeles, Fishbone has finally blessed the release of an official live DVD. The DVD 'Fishbone Live' was released on May 10, 2009. It was filmed during a show in Bordeaux, France in April 2008 by Stephan Kraemer. The band is also currently involved in the making of a documentary film, tentatively titled 'Everyday Sunshine', directed by Lev Anderson and Chris Metzler, due to debut in early 2010. Below are video samples from the DVD including the DVD trailers and the songs 'Cholly' and 'Party With Saddam':


The DVD is available for sale through the band's European management company Ter A Terre.
Posted by Marco On The Bass at 3:36 PM

Wow Fishbone is 30 already. I remember back in 1994 (when I was fist getting into Ska) The Skatalites had just released their 30th anniversary album "Hi Bop Ska" and I thought they were ancient. Now I'm feeling ancient.
-Matt C

i saw them at The Ritz back in the late 80's as well. I never forgot them. Angelo was just the best. Will be seeing them this weekend at Irving Plaza. Thanks for posting those photos.