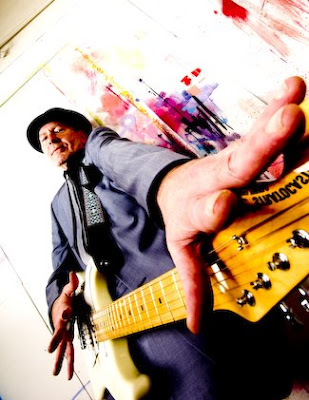 Somewhat forgotten in all the excitement around The Specials recent UK reunion tour and the new Madness album is that 2009 also marks the 30th anniversary of The Selecter. The birth of 2-Tone on March 30, 1979 was marked by the release of a split single. On one side was 'Gangsters' by The Special AKA. On the other side was was an eerier rocksteady instrumental entitled 'The Selecter'. The song has always been a personal favorite of mine and still sounds as fresh and exciting today as it did when it was first recorded. In fact, according to a recent interview Neol Davies conducted with Rockers Revolt, it also remains one of his favorites as well. Interstingly, he sees the sound of the track as a blueprint for many of the songs written and recorded for the 'Celebrate The Bullet' LP. Have a listen to 'Celebrate The Bullet' or 'Washed Up And Left For Dead' and you can hear the similarities in tone and vibe.

According to the great 2-Tone.info Web site: The Selecter began life not as a band but as an instrumental track titled 'The Kingston Affair', which was then later re-named 'The Selecter'. Coventry musicians Neol Davis, John Bradbury and Barry Jones recorded the track in 1977, and it was to remain under wraps until 1979 when it would appear on the flip side of Gangsters. The Special AKA had used the entire recording budget (said to be £700) for Gangsters and were in need of a track for the records b-side. John Bradbury, by this stage drummer for The Special AKA, mentioned a track, which he had recorded a few years previously. The laid back rocksteady sound of 'The Selecter' proved an ideal partner for 'Gangsters' and was released complete with is on unique catalogue number, TT2. This move also earned Bradbury the accolade of being the only person to play on both sides of both the first and the last 2 Tone single releases (JB All-stars 'Alphabet Army'); and on top of that, it also means that he recorded for the label under 3 different guises.

While The Selecter do not appear to planning a reunion or shows to officially mark their 30th anniversary, Neol Davies has recorded and released a new track titled 'Return Of The Selecter' which is available as a free download. Davies posted the following on his Web site: A warm welcome to you and thank you for supporting the music. this year marks the 30th anniversary of the first 2tone records single release 'gangsters vs the selecter' and to mark this occasion I have recorded a new instrumental..... 'return of the selecter' ......in the style of the original track. Produced by Kevin Harrison for Isotope Productions - this brand new recording is free to download throughout the month of April 2009 - I hope you like it ! The new song retains the mysterious and atmospheric vibe of the original with a similarly haunting trombone melody and killer rocksteady bass line. As a quick footnote, Kevin Harrison was a member of Davies' pre-Selecter band Transposed Men.

Pete Chambers: So how did the original 'The Selecter' song come about?
Neol Davies: I had a tune, Roger Lomas had a studio. Brad said: ‘let’s make our own single'. We took our time making it because we were making it up as we went! We were influenced by reggae and the punk idea of DIY recording and ended up with a quirky instrumental that nobody in the music business wanted to release. Some time later (it was recorded between December 1977 and January 1978) Jerry Dammers and The Specials invited me to release the track as a double A side to their song 'Gangsters', an idea which did not take long for me to consider. The experience of selling so many records, so quickly was life changing to say the least. I am very proud to have been part of the first 2-Tone record and 2-Tone itself.

PC: Obviously this new song is being released because of the 30th anniversary, but how long has this idea been germinating?
ND: About 30 years!! Seriously, I thought of recording and releasing it about three weeks ago. I composed the melody previously but I’ve not recorded it until now. I wanted to follow the original track’s feel and update it at the same time and it felt like the perfect time to mark this milestone anniversary.

PC: Who’s playing on it and where was it recorded?
ND: It’s produced and recorded by Kevin Harrison at his DNA studio. I play guitar and bass, the trombone is played by Steve Holdway. A big thank you to both Kevin and Steve for their considerable talents. We used some drum samples that I had recorded on my vintage Slingerland drumkit from a few years ago, sliced and diced them into a Selecter beat and had a lot of fun during the making of it, just as I did when making the original track.

PC: When is it released, and how do we get hold of it?
ND: It’s free to download right now from www.neoldavies.net it’s a musical “thank you” to all the fans of 2-Tone music. The very fact that the 30th anniversary is being acknowledged demonstrates that people still love the music. If there is enough demand, I will release a CD and vinyl version.

PC: There has been various rumours about the Selecter reforming, can you shed any light?
ND: It could happen but when and how is still to be arranged. The more support we get, the more likely it will be. There is a good feeling among the former band members these days which is what’s needed to make music so we’re in the right direction.

PC: Finally how do you feel about the Selecter getting a star on the Coventry Walk of Fame?
ND: I am very happy that The Selecter be given this accolade. We weren’t a band with the usual showbiz connections or university backgrounds that push some bands into the limelight, and I feel we achieved a huge amount from our own combined efforts in a very short time, under too much pressure! On behalf of everyone from the band that was The Selecter, thank you.

The free download of 'Return Of The Selecter' is available at the link below:

http://www.dnastudio.freeserve.co.uk/selecter/selecter.html
Posted by Marco On The Bass at 10:51 AM

My pleasure! I'm glad that Neol Davies has done something to mark the 30th anniversary of The Selecter. The song is great!

THANKS FOR THE SELECTER UPDATE AND NEW SONG LINK. HOPEFULLY THE REUNION WILL TAKE PLACE. I SAW THEM ABOUT 6 YEARS AGO AT THE GALAXY THEATER IN COSTA MESA, CA. AND ONLY 20 PEOPLE SHOWED UP. IT WAS EMBARASSING. THEY DESERVE TO BE MUCH MORE POPULAR. TAKE IT EZ, PAT