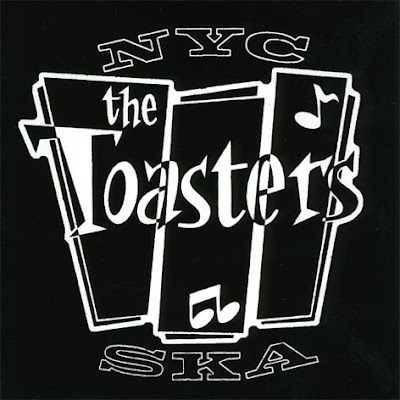 As part of my continuing series of blog posts documenting the rise of the NYC ska scene of the mid-80's, I want to pay homage to The Toasters. The one man who could be credited with single-handedly jump-starting the NYC ska scene and helping to bring ska to America was UK-born Robert 'Bucket' Hingley. After moving to New York in the early 80s and finding a complete absence of the music he loved, he managed to put together his own band in 1981-82 and eventually start his own record label (Moon Ska Records which provided a launching pad for dozens of ska acts but went out of business in 2000). Initially, the band started out as a five-piece, with Hingley on guitar backed by bass, drums, keyboards, and percussion. In 1983, the band released their first single, and in 1985, they released a four-track EP produced by Joe Jackson. In 1986-87, with the addition of a three-piece horn section and two additional vocalists, The Toasters were at the center of a thriving ska scene of like-minded bands that quickly took the New York City club scene by storm.

Hingley conducted an interview with the Temple East Valley Tribune newspaper in Mesa, Arizona in November of 1998 during the height of the 3rd wave ska explosion in the U.S. He discussed The Toasters early days and the beginnings of the NY Ska scene and the role Moon Records was playing at that time in helping to build the American ska scene:

Temple East Valley Tribune: What brought you to the UK from New York?
Robert Hingley: " I was working for an outfit called Forbidden Planet who were in the business of comics and collectible toys, that kind of thing. I was working for them in London for a couple of years and then they sent me to New York to fire everybody and hire new staff. It was ostensibly to be six months, but I've been there for 18 years."

TEVT: So that was at the height of the second wave of ska with The Specials and English Beat, right?
RH: "It was 1980, just after ska had peaked in the UK, but it had made no splash over here."

TEVT: How difficult was it to put the Toasters together, given that ska really hadn't made much of an impact in America?
RH: "It was pretty hard. The hardest thing was to find people who I could get not to play on beat. I had to get some musicians and retrain them, like, "We're not going to play two and four, we're going to play one and three.' Just getting that across at the beginning was tough. Then, having put the band together, getting shows and recognition at all from the business was even harder."

TEVT: With you guys on the East Coast in the early 80's and The Untouchables and Fishbone on the West Coast, it seems like, at least at that time, the coasts had a little bit of ska going on.
RH: " The coasts are kind of the ports of entry for music and the more cosmopolitan cities in the U.S. tend to be on the periphery of it. It's kind of the reverse of throwing a stone in a pool - here stuff starts on the edge and gravitates towards the center as opposed to the other way around. It took the longest time to get to the heartland, but now even places like St. Louis and Phoenix have thriving ska scenes, so I guess something has been done right."

TEVT: Tell me about starting Moon Ska Records and what that's meant to ska music in the United States.
RH: "That was primarily because we got laughed out of every A&R office in New York with our first demo. Even though it was produced by Joe Jackson, it couldn't seem to raise an eyebrow. The thing that satisfies me now is that I still have my job and probably none of those people do."

I regularly attended NYC Ska shows held at CBGB's, the Cat Club and The Continental in 1987-88 and The Toasters line-up that I saw at the time was among the best in the band's history. Though I missed 2-Tone in the UK, the NYC Ska scene of the mid-80's had a similar energy and unity about it. There were multiple bands on the bill of sold-out shows and there was a camaraderie among the bands and the crowd that was unlike any I had ever experienced since. Seeing those early shows have stayed with me to this day and were the driving force behind the creation of my own band which was soon to become a part of the larger NYC Ska scene.

Its one thing for me to write about seeing The Toasters in the mid-80's and another for you to experience it for yourself. Below are two very rare live video clips from The Toasters performing at the Cat Club in New York City in 1986. The band had been together 3 years at this point but was in transition. The original core of the band that Hingley had recruited from the Forbidden Planet comic book store was still in place, but the addition of the Unity 2 (Sean 'Cavo' Dinsmore and Lionel Bernard) as additional vocalists had taken the band to a whole new level and their live shows rivaled any band peforming at the time. Interestingly, this show features the original bassist Vicky Rose as a vocalist and may have been her last show with the band.