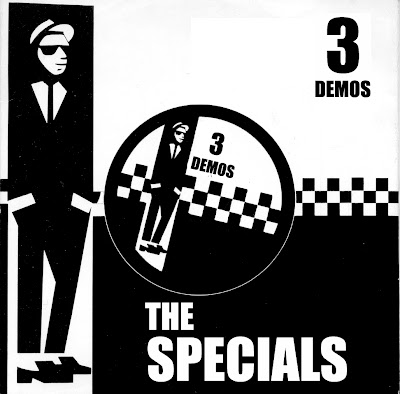 With the announcement that The Specials will be undertaking a second UK tour this November, there has been a lot of speculation about new songs that the band may add to their set-list. While the band has focused on giving fans what they want by playing their most popular songs, there is hope in some circles that they may perform some more off-beat tracks from their second album 'More Specials' or from their 'Too Much Too Young' EP.

To that end, Mondo De Muebles posted 3 rare demos that members of The Specials recorded in 1981 just as the band was coming apart at the seams. One is a muzak inspired version of '96 Tears' featuring Terry Hall on deadpan vocals. The other two tracks are fantastic dubbed out versions of 'Why?' featuring Lynval Golding on lead vocals and Neville Staple with a great chat along with great reggae dub echo and sound effects. I would venture to say this version is nearly as good as the recorded version we have all heard.

I spoke with Roddy 'Radiation' Byers of The Specials to get the inside story on these three demo recordings. According to Roddy: "Those three tracks were recorded by Terry, Lynval and Neville who went on to be the Fun Boy Three! I had recorded a song called 'Sweet Revenge' (a Skabilly song) with some of the guys and another track that went on to be 'Racist Friend' after the band split and was featured on The Special A.K.A. "In the studio" album which retained my guitar part even though I wasn't in the band anymore - i guess my playing was okay?"

Byers also mentioned a long lost song titled 'Sweet Revenge' that has never been heard. According to Byers, "Lynval has the original master which I've been trying to get a copy off him for twenty odd years -naughty swine! This song features the sax player who played on Jerry Rafferty's 'Baker Street'. He was jamming with Geno Washington's soul band in a pub up the road who we talked into playing on our session (cant remember his name?). I don't know the studio where Terry guys recorded, but the studio where my song and 'Racist Friend' were recorded was next to a funeral parlour in King Cross area on London."

Here is a video montage of the '96 Tears' demo version:

Below is a download link to the tracks. Thanks again to Mondo De Muebles for the link and great artwork.

The Specials - Rare Demos
Posted by Marco On The Bass at 9:04 AM

Cool! The versions of WHY are great. Found out about this through the musical-occupations interview podcast with you. Thanks!