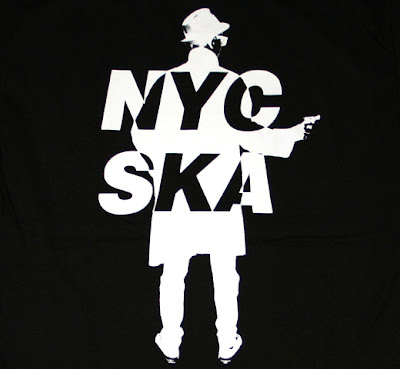 In this electronic age of blogs, Websites and the immediacy of Google searches in keeping up with bands and music, its almost impossible to fathom the pre-historic era of the music fanzine and its importance in promoting bands and keeping fans up-to-date and informed. The rise and subsequent explosion of ska in the U.S. in the mid and late-1980's (and to an extent its resurgence in the UK and Europe at the same time) was chronicled by an ever shifting assortment of ska fanzines that served as a lifeline to ska fans around the U.S. and U.K.
Here in New York City, the ska scene of the 80's was diligently covered by Jeff Baker (AKA King Django) who also played Trombone and sang with The Boilers (and later Skinnerbox and Stubborn All-Stars). Baker's fanzine titled 'Rude Awakening' offered fans interviews and inside information on the comings and goings of the scene. As I help to plan a reunion of NYC ska bands who appeared on the N.Y Beat!: Hit & Run compilation, the interview provides a further look inside the growth of the scene and the young bands fueling its popularity.
I recently came across a scanned copy of a 5-page interview Baker conducted with Rob 'Bucket' Hingley that appeared in Rude Awakening. The interview which appears to be from 1986-87 based on the line-up of the band mentioned, provides great historical information about the genesis of The Toasters as well as the early days of the New York ska scene from Hingley's perspective. I was interested to learn that Hingley had a ska/reggae band in the UK called I-Witness (that had a song in the charts!) before he arrived in New York in 1982 and that he was struck by how young most of the other ska bands in New York were at the time (most were 16-18 years old and still in high school).
Hingley also mentions how he came to meet Joe Jackson who later produced the first album by The Toasters under the fake name Stanley Turpentine (to avoid any problems with A&M Records) and also shares his thoughts on the rest of the ska scene including Second Step, Beat Brigade, The Boilers and A-Kings. The full interview is below. Click each page to see a larger, readable version of the interview. 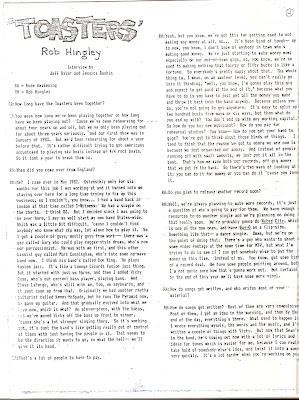 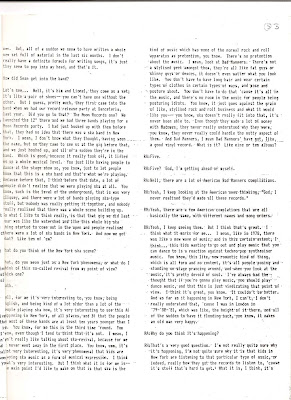 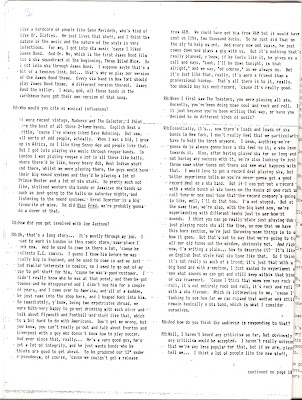 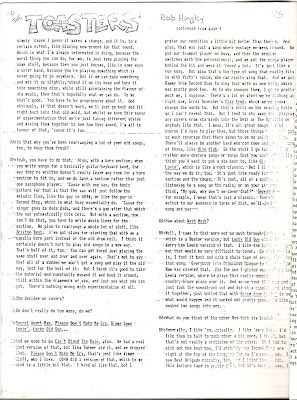 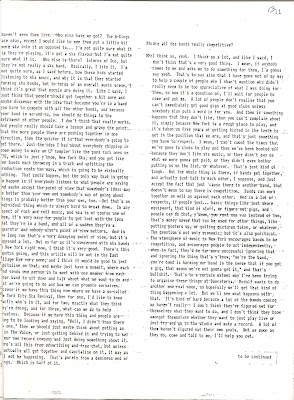 The American and New York ska scenes also generated interest in the U.K. in the mid-80's. This interest was stoked by a deal that Moon Records signed with Roddy Moreno's Ska Records to distribute albums by The Toasters, The Boilers, Shot Black & White and Detroit's Gangster Fun in the U.K. A U.K.-based skazine called Skankin' USA included a detailed article about the U.S. ska scene of the 80's, focusing on U.S. bands that had albums for sale in the U.K. Though I don't have details, it's likely the article was written by someone at Ska Records. Even without a date or details, it makes for great reading and there are fantastic pictures of The Untouchables, Shot Black & White, Bimskalabim and Gangster Fun. 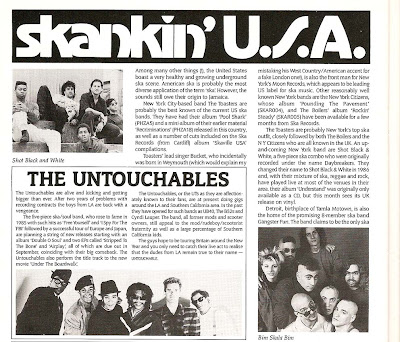 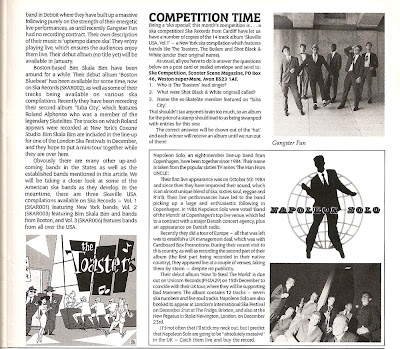 That Skankin U.S.A. article was definitely written in 1988 just going by the albums they mention. Tuba City wasn't released yet, but that one was released some time in 1988. and the Gangster Fun album they say will be out in January came out in 1989.

You are correct sir!

skankin' usa looks to me like a feature from Scooter Scene Mag in the UK - I just liked it 'cause they used something near to Cupertino, the "trapper keeper" font

Rude Awakening is out the 10/87 issue, thanks to Rikard Schaffer amty.se for scans to this wider audience!

Thanks Johnny. I did a bit of research and learned that the interview with Bucket from The Toasters is from issue #8 of Rude Awakening from June of 1986.

Many thanks to Rikard for the scans of the skazines.

The Bucket interview was very intriguing however I was hoping to find out more info about the mystery of "Not Bob Marley" (Buckets pre Toasters band which released material on some early Ska compilations like "Mashin' Up The Nation").
I was also stoked to see that he cited James Bond as being what got him into Ska music to begin with. I just posted an article on my blog last month about the influence James Bond has had on Ska music and a lot of very rare early JB covers.

Great finds--and they really help fill in some blanks from that pre-internet era!

Matt C: im no expert on the matter, but im pretty sure Not Bob Marley wasnt a pre-toasters band, i think it just kinda morphed into the toasters eventually. Im pretty sure i read somewhere that Not Bob Marley was a joke name that stuck for a minute and once they got more serious they changed it to The Toasters.

I do know for certain however that Not Bob Marley did a three song demo in 1983. Only one song was ever released to my knowledge, and that was "No Respect" which came out 6 years later on the Mashin Up The Nation comp, and then again as a bonus track on the Moon re-release of Thrill Me Up. I'd love to hear the other 2 tracks, maybe Jeremy will put the other two on a Megalith reissue.