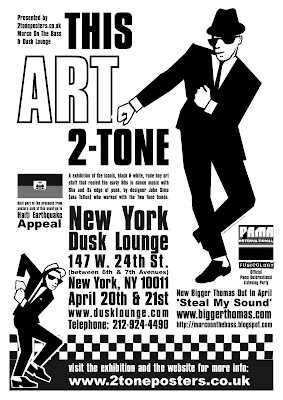 Though I'm not a religious person, I do worship at the Church of 2-Tone and as such I have deemed the week of April 19-23rd 'Specials Holy Week' here in New York City. While the centerpiece of the week will be the band's two shows at Terminal 5 on Tuesday April 20th and Wednesday April 21st (sold out), there are also some additional activities planned that should satisfy the appetites of fans of the band and 2-Tone who are looking to celebrate all week long.
I'm incredibly excited to announce that I've partnered with 2-Tone Posters in the UK to present 'This ART 2 Tone' at the Dusk Lounge in Chelsea following The Specials shows each night in New York. The mini art exhibit/after parties will showcase iconic album covers, newspaper and magazine ads, posters and other media that were designed by Chrysalis Records graphic artist John "Teflon" Sims when he worked with 2 Tone Records. Full-size prints of several of his original work for the label (see some of them below) will be displayed and postcard-size versions of the more popular ones will be offered for sale--with a percentage of the proceeds being donated to ongoing Haitian Earthquake relief efforts.

Since Lynval Golding and Horace Panter are both prominently featured on the new Pama International album, the events will also serve as listening parties for 'Pama Outernational' (arranged through Jason Lawless of the Lawless Street blog and Gabe Pressure of Dancing Mood and Musical Occupation). Pama Outernational is being released on Lawless Street Records in the U.S. this April.
While there is a chance that members of the band and The Specials entourage may stop by each night, the real reason for the parties is to give fans of the band and 2-Tone music a place to meet up after the shows to enjoy a drink, talk shop with other fans, hear a great mix of ska and reggae and take in the amazing diversity of John Sims 2-Tone design work that remains as vibrant and exciting today as it was 30 years ago. There is a Facebook page for the event if you want more information or want to interact with other fans who may be attending. 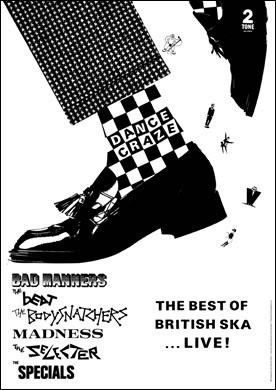 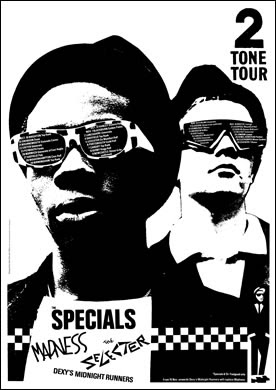 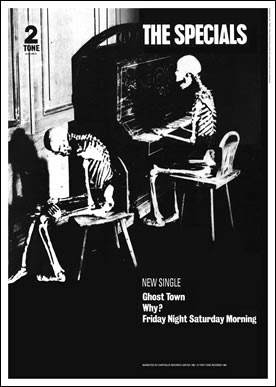 The week long celebrations wrap-up with the New York Ska Festival at B.B. King's in Times Square in New York City on Friday April 23rd. The show may feature one of the most diverse line-ups of ska bands in New York with the goal of bringing together the different generations and cultures of ska in New York. The show is being headlined by a recently reformed King Chango, who are one of the top Latin ska bands in the world featuring a mix of hard-charging ska, Latin rhythms and reggae.
Posted by Marco On The Bass at 1:49 PM

Great post Marco On The Bass! I used AV Planners before and they did a good job! Here you go - http://www.avplannersinc.com/ny-new-york