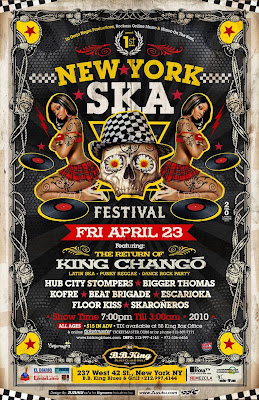 The New York Ska Festival will take place at BB King's in the heart of Times Square in New York City on Friday April 23rd. This show comes at the end of a week that will see The Specials grace New York City with two performances at Terminal 5 on Tuesday April 20th and Wednesday April 21st. The Specials shows should give a boost to the NYC Ska scene by energizing hard core and casual ska fans alike who will hopefully come out to see some of their own homegrown bands in action a few days later.
What's interesting and exciting about this line-up is its diversity. First, is the mix of influences that the eight bands on the bill perform including 2-Tone, Latin, reggae and punk influenced ska. The line-up also includes several generations of bands that span 25 years back to the very beginnings of the NYC Ska scene (NY Beat!: Hit & Run compilation era bands Beat Brigade and Floor Kiss are on the bill) as well as newer bands that have only recently formed. More significantly is the cultural mix of bands performing together. Its rare for bands from the Anglo and Latino ska scenes to play shows on the same bill, but this is a case where fans will get a unique chance to see and hear some of the best bands in these two thriving city ska scenes come together to perform. The crowd that comes out for the show should mirror the cultural diversity of New York City where Spanish is spoken as a first language by millions of the city's inhabitants.
The show marks a special homecoming for the headliners King Chango, one of the premiere Latin ska bands in the world, who call New York City home. Led by Andrew 'Blanquitoman' Blanco, the band has only recently reunited to play shows again after a hiatus of several years. Starting off as a ska band, they now incorporate ska, reggae, dub, Latin and punk into a blazing mix that is both political and danceable.
Below is a video mix of the four headlining bands on the bill including songs by King Chango, Hub City Stompers, Bigger Thomas and Kofre:


There is a New York Ska Festival Facebook event page where you can get more information about the show. Tickets are available from the BB King Web page.
Posted by Marco On The Bass at 11:05 AM

This should be a great show!