The Specials May Record Comeback Album 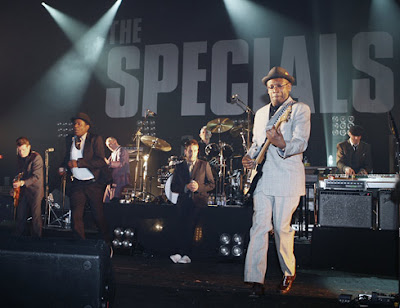 According to a news story in Spinner, The Specials may be planning an 'incredibly great' LP of new material to follow their 30th anniversary tour. According to Terry Hall, "We've played around a bit, but we've all agreed that if we're going to make an album, it's got to an incredibly great album. If we're up for that, and we think that we have the parts in place, there's no reason we won't start recording. I think at this level [we need] to play for a while, like we did before we had a record deal." Interestingly, the news of the album comes out following the extensive video interview that Jerry Dammers conducted with The Guardian over the weekend.
An album of new material is really the only logical place that the band can go at this point if they plan to keep themselves relevant and avoid the label of nostalgia touring act. Without Dammers's involvement though, songwriting could be tricky – and Hall admitted that "nothing has been written" thus far. It will be very interesting to see how the song writing by the band will be divvied up. Hall, Roddy Byers, Lynval Golding and Neville Staple have all written songs for their own separate solo bands as well as for The Specials Mk II. I have always believed the 'Guilty 'Till Proved Innocent' LP to be a very solid album, with some great original songs and vocals from Neville, Lynval and Roddy that really come close to the first two albums by the original band. Adding in Hall's vocals could make it comparable to those first two albums.

Below is a radio interview that Hall and drummer John Bradbury conducted yesterday ahead of the band's appearance at Royal Albert Hall in London as part of the Teenage Cancer Trust.