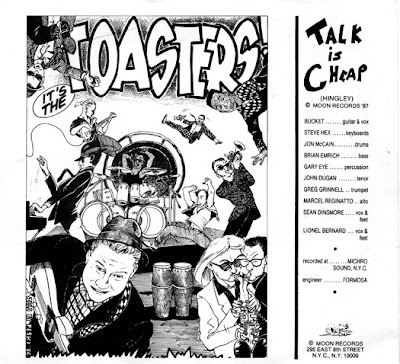 To celebrate the upcoming NY Beat 25th anniversary reunion at Dusk Lounge in New York City on April 10th, I have created a podcast that includes songs by nine of the bands that featured prominently on the original 14-track compilation (the tenth song is by Legal Gender who later went on to become The NY Citizens). Most of the songs on the podcast come from long out-of-print records that were available shortly before the release of the compilation or come from albums recorded after its release. A few songs come from 7" singles that were released on Moon Records in the mid-80's. A few more (like songs by The A-Kings and Second Step) are drawn from rare demo recordings that were never widely released or distributed.

The period of 1985-88 was a very fertile time for the bands that featured on the N.Y. Beat: Hit & Run compilation. Hot on the heels of the release of the compilation record, Moon Records honcho Rob 'Bucket' Hingley made bold plans to release a series of six split 7" singles that would highlight the best of the New York ska scene. Sadly the '6-Pack Series' only made it to two 7" single releases in 1987. The first featured The Toasters and Beat Brigade on what may be one of the best American ska 7" singles ever released. The Toasters are in amazing form on their fiery classic 'Talk Is Cheap' backed by Beat Brigade's playful and rocking 'Try And Try Again'. The run was limited to just 1,000 copies which makes originals incredibly hard to find collectors items. The second split 7' single featured Legal Gender with their unique new wave ska sounds on the song 'Overcast'. The flip side of the single is the catchy mod rock of The Scene with 'Bruise in Me' featuring the stellar vocals of Melanie Rock. This single was also limited to just 1,000 copies. 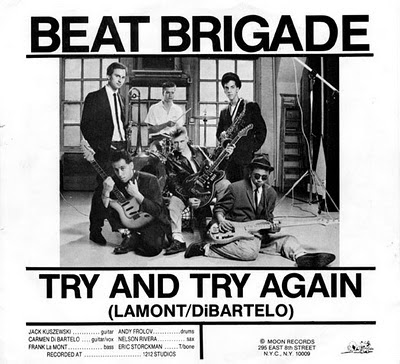 Other bands that were featured on the compilation also recorded EPs and full albums, including Cryin' Out Loud who self-released their EP 'Live It Up' in 1985. The video for the song of the same name was featured on MTV's 120 Minutes for a time giving the band a short taste of the lime light. Urban Blight recorded 'From The Westside To The Eastside' on a mobile recording unit at their rehearsal space near New York University and released it in 1987 leading to local radio airplay around the New York region. The Boilers followed suit as well with 'Rockin Steady' which they recorded at Jeff Baker's parents house in New Jersey. The record was slated for release on Moon Records, but a disagreement with Hingley over the artwork and title prevented that from happening. It remains a lost gem of the American ska scene. Finally, Shot Black & White (formerly The Daybreakers) won a 'Battle Of The Bands' competition at the New Jersey Shore in 1987 that gave them the free studio time to record their full-length LP 'Understand'.
Below is a podcast featuring some of the best songs that NY Beat-era bands recorded. Enjoy and listen to them often!
NY Beat 25th Anniversary Podcast Mix
Talk is Cheap - The Toasters
Try and Try Again - Beat Brigade
U Must Be - Urban Blight
Beckoning- The A-Kings
Two Men In Suits- Second Step
Pounding Heart - Cryin' Out Loud
Bruise In Me- The Scene
Overcast - Legal Gender
Trouble Me - The Boilers
Understand - Shot Black & White (formerly The Daybreakers)
NY Beat: Hit & Run 25th Anniversary Podcast Mix
Posted by Marco On The Bass at 2:50 PM

I wish i could have had that Floor Kiss rip for you in time.