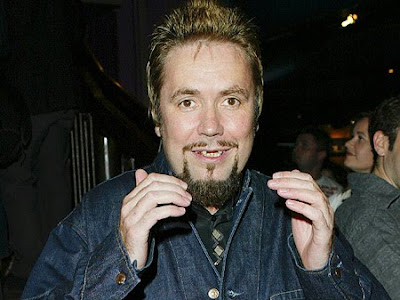 Late last week Jerry Dammers sat down with the noted rock'n'roll journalist Paul Morley (who writes and interview musicians for the UK newspaper The Guardian) for a fascinating and enlightening 21 minute video interview. Its a must watch for fans of Dammers, The Specials and anyone surprised or upset by his exclusion/refusal to participate (depending on your position) in the band's current reunion tours. The video is hosted on The Guardian Web site. You can watch it here as well as read Morley's essay on Dammers.
I can honestly say after watching this video that 1) I totally respect Dammers and his vision for his Sun Ra Tribute musical project The Spatial AKA Orchestra and 2) that it is a good thing that Jerry and his 6 ex-band mates in The Specials have gone their separate ways. According to a recent review of his band's current UK tour, 'To many Dammers will be perpetually frozen in time circa 1979 to 1981, but in many ways his current incarnation of arranger, bandleader and performer is producing more forward thinking and challenging material than that of his time as 2-Tone head honcho.' As much as I love The Specials, I accept that Jerry has moved on.

Watching the video is a time commitment in this age of 3 minute pop music interviews. It really is 21 minutes long. But in watching it and sticking with it all the way through you will finally see the real Jerry Dammers and not the one portrayed by the UK media as a spoiled sport who wanted to keep his former band mates from reuniting. He's funny, relaxed and clearly passionate about the idea and concept of Sun Ra as a way to reinvent himself post-Specials but also as the place he saw the concept of The Specials ultimately ending up. I say that without any prejudice or disrespect to anyone, but want to warn any fans of the band still holding out hope that some sort of reconciliation is in the cards. It is not. And that is a good thing.
Once you watch this interview you too should have a better idea of where Dammers real passion and interests lie. He has replaced his love and passion for Jamaican ska as a way to comment politically on the state of the UK in the 70's with a love of Sun Ra and his avant garde Jazz stylings as a way to make sense of the 21st Century. While Jerry still retains a wonderfully subversive sense about the power of music to change and expand people's consciousness and the political nature of music there is no way he would be happy on stage with his old band mates. Morley captures this when he writes of Dammers motivations in starting his new project: 'Dammers doesn't directly form a Specials tribute group, or even a tribute group dedicated to honouring a rock or pop or ska or blues or Britpop band. He forms a tribute band to the spirit that caused him to form a group such as the Specials. As the ultimate music lover, a lover of music as a ritualistic means of creating an out of body experience, of changing your circumstances, altering the parameters and textures of your immediate environment, positively affecting your mental state, he commits himself to forming a tribute band to the very idea of music as a way of inventing new selves and new realities.'
I hope Dammers will consider bringing his band over to the U.S. at some point. It makes sense as Sun Ra was an American and his musical and political vision was based on his own experiences as an African-American in the early 20th century.
Posted by Marco On The Bass at 3:52 PM

I hope the Spatial AKA comes to the US as well! And I agree that with all the Jerry Bashing going around about him not getting along with his ex Specials band mates this really gives a better understanding of what he is all about.
Favorite qoute (went something like) "The Specials weren't a Ska band we were a band who played cutting edge music and Ska music just so happened to be cutting edge at the time".

HI Matt C. I agree. it was good to finally get a chance to hear Jerry speak outside the confines of The Specials. Despite some eccentricities (he should get his teeth fixed) he remains a musical visionary.

@Matt: I love that quote, too. Jerry Dammers has soon moved on. We should acknowledge that and be thankful to him for furnishing many of us with a longlasting love for ska on the way.

What I still don't get is the bad blood between Jerry Dammers and the rest of the Specials. The difference of their musical approaches is so obvious that it just couldn't work together it seems. On the other hand, Jerry denied in former interviews that he had planned to re-arange their songs to jazzy versions for the 30th anniversary tour (which was to be heard from the other camp).

Do you think Jerry has a dental bridge that he pops out for photos and filmed interviews as a way of maintaining his musician, cool kat, outsider status?

From the interview, it is clear that he has moved way beyond The Specials, but had things worked out differently, it would have been fascinating to see what might have transpired if they could have worked out their musical/personal differences.

I, for one, wanted the current band to re-interpret some of the hits and expand their set list to include a few new songs or classic ska covers--they shouldn't just play the hits note-for-note (c'mon, versions of The Specials did this throughout the 1990s). Having said that, I've heard firsthand (from Pete Porker!) and read nothing but good things about their stage show...

With all the talk of the reformed Specials possibly cutting a new album, it seems such a shame that Jerry's talents won't be in the mix.