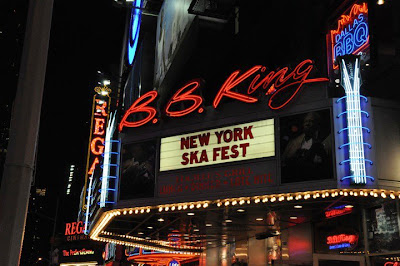 What a week for ska its been in the Big Apple! First, two sold out shows by The Specials in New York City created an energy and buzz about ska music that I have not felt in many years. The shows brought out a mix of old and new fans who seemed energized, revitalized and renewed by the music. There were slews of pre-show gatherings and after show parties and in between them all the people I talked to seemed genuinely excited about having seen The Specials live again. There was even some talk that The Specials reunion (and an album of new material?) could be a good thing across the board for ska in the U.S.
The Specials shows mid-week were a wonderful lead in for an interesting musical experiment -- the New York Ska Festival -- that took place at B.B. King's in Times Square in New York City on Friday night. It came the same day that Arizona Governor Jan Brewer signed a bill into law making failure to carry proof of citizenship or legal status a crime (essentially giving the Police free reign to stop Hispanic looking people to check them for their citizenship status). As such, the show saw the first real coming together of the Anglo and Latino ska scenes in New York City. Something which would have seemed to be a no brainer, but which in fact has occurred less than you would think. While New York City is no Arizona, the Anglo and Latino ska scenes remain quite separate. As my fellow blogger Steve Shafer from Duff Guide To Ska pointed out in his recent post that reviewed the show 'For all the talk and singing--and I believe all of it to be very sincere--about racial unity at so many of the shows I've seen over the years, the New York Ska Festival audience actually embodied it! The crowd was fully integrated, the vibe was great, everyone had a blast, and bands from both ska scenes now have a slew of new fans they probably wouldn't have had without this show.'
The fact is that this may have been the first show where I saw a packed dance floor that actually featured a real mosaic of black, White, Asian and Latino ska fans dancing and moving to all eight bands on the bill regardless of the language they were singing in. It occurred to me that the dawning of a new anti-immigrant political reality in Arizona (and other border states) could be a clarion call for the beginnings of a new American-styled 2-Tone, (or 3-Tone - black, white and brown!) musical and political response, that is bi-lingual, but built on bringing together the rich musical variety of ska in all its forms. One of the amazing qualities of ska is its mutability. It has easily incorporated a variety of musical styles over time, including Latin music. As someone said to me backstage on Friday night, "Ska is ska. It really doesn't matter what language the singer is singing". How true. 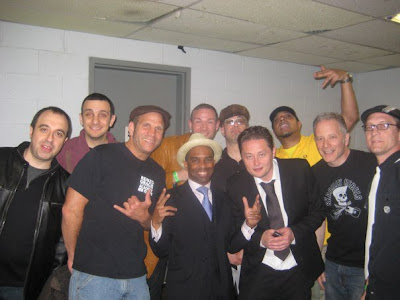 Interestingly, The Specials influence could be felt throughout the whole show (musical, political and fashion-wise) and my band Bigger Thomas had the pleasure of welcoming Drew Stansall (sax) and Nikolaj Torp (keyboards) from The Specials (see the picture above of them with us). I had met them at the Dusk Lounge after parties earlier in the week and they were interested in seeing the New York ska scene in action. They sat in on two songs with my band (see the videos below of Nite Klub and Monkey Man) and their appearance sort of blessed the night, giving the show an inspirational feel. Both Drew and Nik are very friendly and approachable and they spent most of the night speaking to fans at the bar and backstage.


The show was not only cross cultural but cross generational, featuring the reunion of some N.Y. Beat era bands (Beat Brigade featuring Remi from Second Step, Floor Kiss) as well as the return of King Chango (see the video below), who have carried the banner of Latin ska for some time in the U.S. and South America. Their return could be well timed based on what I saw on Friday night and their re-imagining of 'Venezuelan In New York' by Sting and the challenges faced by immigrants is more current than ever. Here's to hoping this is the first of many shows here in New York and around the U.S. Keep your eyes open for more shows this summer!
Posted by Marco On The Bass at 8:35 PM

Shouldn't that be 5-Tone for black, white, brown, yellow and red? Or even 12-Tone for the full chromatic spectrum? :-)

Btw, like jazz, latin music has always be a part of ska and reggae, check out some of the original Skatalites stuff like Green Island with its Mariachi style chorus. The latin influence in Jamaican music comes from the Spanish legacy of the Island's pre-British history.

I like 5-Tone very much! I may use that down the road. 12-Tone is quite good as well.

I love the latin influence in ska. 'Latin Goes Ska' is one of my favorite Skatalites songs. What's great about latin ska here in NY is how varied and underground it really is. The bands love 2-Tone but mix in their own traditional sounds and sing about the immigrant experience and what it is like to be here away from home. The themes are the same as the UK in the 70's but the language and sounds are diffeent.

Also, you can't forget that Burru drumming has its roots in African drumming AND the Bolero.

Excellent point about all the racist, un-Constitutional, un-American crap going on in Arizona...