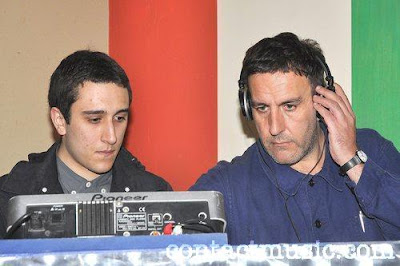 If you were lucky enough to see The Specials during their most recent tour, then you were treated to an opening DJ set by Felix Hall and his partner Trevor Evans. Felix is the son of The Specials singer Terry Hall, and along with Evans has been warming up fans of the band in the U.S., U.K., New Zealand, Australia and Japan with their pre-gig mix of Dub, Punk and Ska DJ sets. Hall who lives in London has been DJing strictly reggae for about 5 years with a concentration on reggae from the late 70s and digital reggae from the early 80s.
I had the chance to connect with Hall, who answered questions about his burgeoning DJ career.
Where did you grow up?
Was born in Manchester, lived near Coventry for a while and currently in North London.

What are your earliest memories related to reggae, ska, rock steady and dub music?
I first heard a compilation when I was about 7 or 8 in the house and it had me hooked.

Do you remember the first reggae or dub album you ever heard? Do you listen to other types of music or is it reggae all the time?
One of the first records I remember hearing and picking up that made a big impression was Know Myself by Junior Reid on Greensleeves, it's a faultless record. Late Night Blues by Don Carlos, Let Go This One by Anthony Johnson are some of the first records I remember that really made a mark on me too. Mostly yeah I also listen to some Hip Hop, MF Grimm, Kurious Jorge, Kool G Rap, that sort of stuff.

When did you start to DJ?
I first played out around 5 years ago at a night I sort of fell into in London.

Who are some of your favorite reggae artists? Based on your DJ sets it sounds like you might prefer 60's and 70's artists?
I wouldn't say I have a particular favorite artist or even producer, there are certain records that I pretty much play consistently at every gig and listen to a lot at home and always sound brand new. I suppose Echo Minott, White Mice, Steve Knight, Barry Brown are among my favorite artists if it comes down to it. Era wise the late 70's towards early digital is my preference over all.

You spin original 45's when you DJ right? Do you prefer vinyl to using MP3's on an iPod?
I'm all for the greater sound quality and there's a real sense of pride in what you play with vinyl too. Can't deal with anything else!

Where do you find most of your vinyl? Online or crate digging? What's your latest find?
Quite a lot online recently, I get a lot of records from Out on the floor in Camden Town, Peoples Sound in West London and Deadly Dragon in NY. I picked up Raggamuffin Soldier (Steve Knight) and No Peace Until (Roman Stewart) the other day at Out On The Floor. 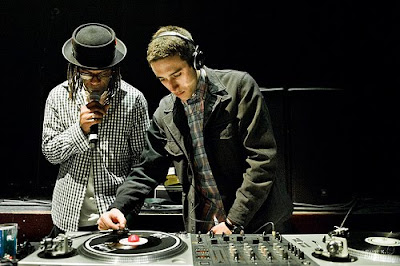 How do you and Trevor Eavns work together when you are doing a set? Do you take turns? Has he been an influence on you as a DJ?
We sometimes play 1 for 1, or we split it into two separate sets, Trevor plays a lot of Ska and early Reggae, he's always there on the mic also. Yeah I've learnt a lot from him.

What were the two UK 30th anniversary tours like?
Great fun man, a lot of the gigs felt like being in a time warp, the atmosphere was brilliant.

Can you share any unusual experiences from The Specials tours so far? Where have you gotten the best response to your DJ set?
New Zealand was a really memorable set, and playing in New York is up there too. It's just been an amazing opportunity to experience the world, and to see the reception the band receive out of the UK.

What is your favorite song by The Specials?
I'm not sure, maybe 'Do Nothing'.

Have your heard the new 'Mos Dub' project by Max Tannone? He's mixed Mos Def's vocals over classic reggae and rock steady tracks? Great stuff.
I've heard of it but not actually listened to it yet, I shall check it out man.
Hall will be back in the U.S. and Canada later this summer when The Specials return to play New York, Boston and Toronto and may spin a few of his own DJ sets in each city. In the meantime, if you want to hear Felix do what he does best, click the link below to download a DJ set he did when he was in New York this past April.
The Specials DJ Felix Hall and more: Deadly Dragon Sounds, April 12 at 6PM ET
Posted by Marco On The Bass at 3:07 PM

I fancy his dad