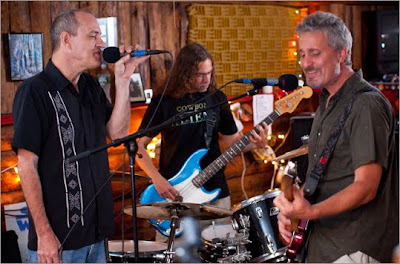 Bim Skala Bim's run of reunion shows this weekend across New England merited a long feature story in today's Boston Globe. Its a great read for anyone who is a fan of the band that released nine albums from 1986 to 2000 and are directly responsible for the growth and popularity of American ska. They remain a personal favorite of mine as they were one of the first big name band's that my band Bigger Thomas opened for during our early years. We played a number of shows with them at the legendary City Gardens in Trenton, New Jersey.
Amazingly, despite growing popularity and successful tours, the band remained independent, negotiating distribution deals but never signing with a label. They were offered their share of contracts, but the terms — which always included handing over song publishing rights — never struck the band as fair. The online edition of the newspaper also features a great history of the band through pictures.
The best part of the online story was the inclusion of a video of three members of the band -- singer Dan Vitale (who now lives in Panama), bassist Mark Ferranti and guitarist Jim Jones rehearsing the song 'Set Me Up' for the reunion shows. You can watch it below.

If you happen to see the band this weekend, please let me know. Any video or pictures would be much appreciated.
Posted by Marco On The Bass at 9:41 PM