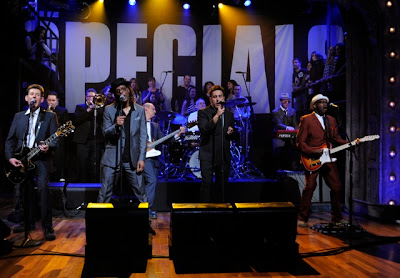 It turns out that The Specials will be playing a show in New York City after all! But instead of buying tickets, you will need to set your DVR to record. The band are booked to perform live on Late Show With David Letterman on Monday August 23rd. Though I'm sure the TV appearance was originally booked to help promote U.S. tour dates which have since been cancelled due to visa issues, its still a small consolation for fans who had been excited about a free show scheduled for Central Park the day before. The band are still scheduled to perform two shows in Toronto at the Sound Academy on Friday August 27 and Saturday August 28th. These shows are make-up shows for ones that were cancelled back in April.
It will be interesting to see what line-up the band brings to perform on Letterman. Back in April Neville Staple missed performing on Late Night with Jimmy Fallon, and was replaced by Trevor Evans (who is a childhood friend of Staple's and was one of the band's early roadies). Evans now tours with the band as a DJ with Terry Hall's son Felix and they spin reggae sets before the band performs. There has been speculation that Staple has had trouble with obtaining a visa to enter the U.S.
Posted by Marco On The Bass at 11:30 AM

So, if they couldn't get a visa to play a show in New York......how are they getting in to play Letterman? I'm so confused and would like to call BS on someone involved, maybe

I hear you and share your frustration. My guess is that the band decided the national exposure on Letterman for two songs (without the band member who was unable to get a visa) was worth the short trip to New York.

They probably had trouble obtaining WORK visas. Letterman would be an unpaid gig. But any tour dates that the band would benefit from monetarily would require a work visa & is (I think) a bit more of a challenge to nail down. Not sure if they were getting paid for the Central Park gig though :/

from the specials website...note the diff. date:

The Specials will be making an appearance on the Late Show with David Letterman, 26th August 2010

You still need a work visa for unpaid gigs. It's not wether or not you're being paid, it's wether or not you COULD be paid for what you're doing. Our group just underwent the same process. And yes, it is a huge pain.