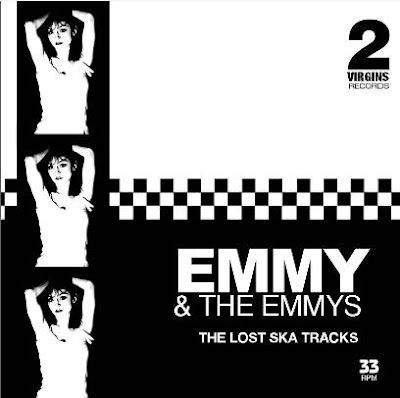 The fine people at Banquet Records in the U.K. have struck again. They have released a 7" ska bootleg of Madonna's early 80's flirtation with ska music as part of their ever expanding ska boot series. I wrote about Madonna's ska past earlier in the year, and while I'm not the only person who was aware of her rude girl persona, I would like to think that I might have played a small part in providing the inspiration to whoever is behind this release. Other ska bootlegs in the vinyl-only series include: Amy Winehouse, Lily Allen and No Doubt as well as Jools Holland and Joe Strummer with Long Beach Dub All-Stars covering 'The Harder They Come' by Jimmy Cliff.

While I can't speak to the legality of these bootlegs, which focus on out-of-print tracks and live cuts, I have always appreciated the creativity behind them (design wise they are fantastic: each sleeve is modeled after a 2-Tone single) as well as the consistency with which they have released them. Though most of the songs can be procured one way or another on-line, the notion of having them on colored 7" inch vinyl is very intriguing.
The Madonna 7' features two songs. The first is called 'Love On The Run'. Its a simple demo with skank guitar and syncopated ska drums and Madonna's unmistakable voice which is a bit rough around the edges but has a chirpy and upbeat quality. The song almost sounds a bit like very early No Doubt take on ska. The other is called 'Simon Says' and has a distinctly upbeat ska/ reggae vibe. Have a listen to both songs below.

If you like what you hear and live in the U.S., you can purchase the vinyl from Jump Up Records based in Chicago.
Posted by Marco On The Bass at 9:09 PM

Amazing. It's great when you can uncover Ska roots of pop stars. The world's more Ska than we know. ;)