House Of Fun: The Story Of Madness To Be Published On October 31st 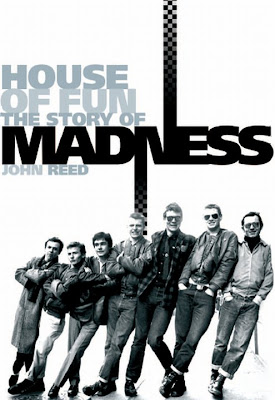 Just as Madness fans were celebrating the news about a rumored new album that is due out in 2011 comes fantastic news of the pending publication of the definitive book about the band. Called 'House Of Fun - The Story of Madness', the 500+ page tome written by John Reed is destined to be the new bible for all fans of the Nutty Boys. The book is due to be published by Omnibus Press (the self-proclaimed 'World's Largest Publisher of Musical Related Books') on October 31st. The more compulsive among you (myself included) who don't want to fight the masses lining up for copies at the local book store, can pre-order copies at a significant discount (25-35%) off the listed hard copy price from on-line book retailers Amazon.co.uk and WH Smith. Reed is a noted music writer having previously authored books about The Jam and Paul Weller.

Not content to buy the book without a description? Here you go: Madness are a British institution. Formed at the height of Punk London in 1976, the Nutty Boys mixed old Ska and Reggae rhythms, astute social comment and music hall humour to make them the most successful UK singles band of the Eighties - as popular with the grannies as with post-punk teenagers hungry for an alternative to the glossy pop of the age.

In Thatcher's Britain, Madness seemed like an anachronism: resolutely working class, down-to-earth and facing adversity with a glint in the eye. And yet, in terms of pop music, they helped define the age via hits like "My Girl", "One Step Beyond", "House of Fun" and "Baggy Trousers". From their roots in North London through their emergence as part of 2-Tone and onto their fall in the late 80s and subsequent rise via the Madstock festivals, "House of Fun" celebrates this very English musical phenomenon.

John Reed offers an affectionate yet insightful version of events, helped by candid interviews with those who've worked with Madness over the years.

From the trials and tribulations of inter-band disputes, accusations of racism and their eventful split to the highs of their purple patch from 1979 to 1986 when they justified their nickname of The Magnificent Seven via an unmatched succession of classic hit singles, "House of Fun" - for the first time - tells the story of Madness.

Reed spent countless hours interviewing all the members of the band as well as all the important players in their 30 year career. Needless to say he is a fountain of Madness information, trivia and facts. You can test your Madness knowledge against his at a quiz he developed over at the Madness Central Web site. I tried to take the quiz and failed miserably (only scoring two correct answers). You can have a go here.

The book is available for sale from Amazon.com: