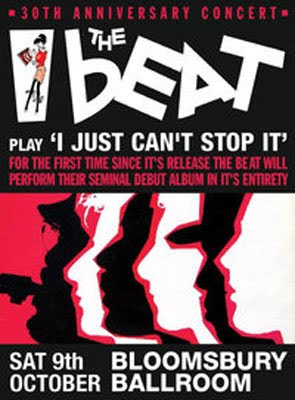 For anyone who loves 2-Tone era ska and reggae, 2010 has been an amazing year to celebrate the music's legacy and longevity. With 1980 as the high point of many iconic releases, 2010 has been a bonanza of 30th anniversaries. With The Specials now actively touring, Madness announcing plans for a new album of material and UB40 touring later this year to celebrate the 30th anniversary of the 'Signing Off' album, its now time to turn our attention to the 30th anniversary of one of 2-Tone era ska's all time great albums, namely 'I Just Can't Stop It' by The Beat. To celebrate this milestone in the U.K., Ranking Roger's version of the band (featuring Roger, his son and Everett Morton on drums) will perform the album, in its entirety, exclusively at the Bloomsbury Ballroom in London on Saturday October 9th. The performance comes a few weeks ahead of a similar performance by Pauline Black's version of The Selecter at the same venue on November 13th to mark the 30th anniversary of their debut album 'Too Much Pressure'. Here in the U.S., Dave Wakeling's version of The English Beat have marked the 30th anniversary by continuing their road warrior ways with a coast-to-coast tour featuring Bad Manners! Its like we've entered a 2-Tone era time machine!

I have to say I love the idea of a band performing an album in its entirety and I think its a clever way for a band to market a show or a tour. The Beat's first album (like UB40's 'Signing Off' and The Selecter's 'Too Much Pressure') is certainly a worthy collection for this type of showcase. While the band had a long and varied recording career, the band's first album remains a classic of the genre. The Beat debuted with a cover of Smokey Robinson's `Tears of a Clown' b/w `Ranking Full Stop' on 2-Tone. During the flurry of A&R interest than ensued, The Beat secured a deal with Arista (on their own 2-Tone inspired imprint Go-Feet) and released, `Hand's Off... She's Mine' b/w `Twist and Crawl'. The band capitalized on this with third single `Mirror in the Bathroom' b/w Prince Buster classic `Jackpot' followed by their debut LP `I Just Can't Stop It' which featured both Go-Feet singles, further Prince Buster songs `Rough Rider' and `Whine & Grine' (augmented by political toast `Stand Down Margaret') and a fantastic cover of Andy William's `Can't Get Used to Losing You' (which became a single on the release of their later best of compilation) and five more originals.

Here are video's of Ranking Roger's version of The Beat performing songs from 'I Just Can't Stop It' including 'Ranking Full Stop' and 'Rough Rider':


Tickets for the The Beat performing 'I Just Can't Stop It' on Saturday October 9th at the Bloomsbury Ballroom in London are available through the promoter AGMP's Web site.

Fishbone is playing The Studio at Webster Hall on Sept. 8