Neol Davies Unveils His Version of The Selecter in London 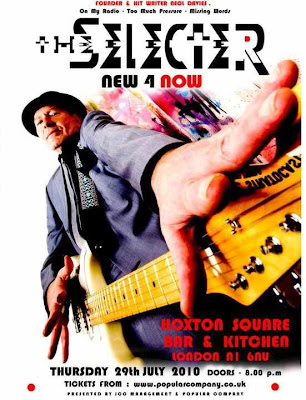 The saga of the competing versions of The Selecter kicked-off this past weekend with a performance by Neol Davies who unveiled his new version of the band at the Hoxton Bar & Grill in London. During a recent interview I conducted with Davies, he hinted at the make-up of the new band as well as a set that would feature new songs. The full nine piece band line-up includes:
Neol Davies - Guitar/Vocals
John Gibbons- Vocals
Dean Ross- Hammond Organ
Daniel Crosby- Drums:
Dray Bayuni- Bass:
Tim Cansfield- Guitar
Faye Treacy, Ellie Smith, Hannah Taylor - Brass
The set featured a mix of band classics like 'Missing Words' and 'Celebrate The Bullet' as well as a number of new songs including 'The Return Of The Selecter', 'Haunted' and 'One Mother' which all sounded great and highlighted Davies searing guitar playing which harkened back to the best of the 'Celebrate The Bullet' LP. Though the choice of John Gibbons as lead vocalist is inspired based purely on his talent and his range, it also takes some getting used to given how much Pauline Black's vocals and energy is associated with them. According to a post on his blog following the show, Davies indicated that more shows are planned for the future. You can watch a good deal of the set below:

The Return Of The Selecter

Though the reality of two version of The Selecter is intriguing, its a shame that the members remain divided. Nevertheless, fans of The Selecter now have the choice to see competing musical visions for the band as laid out by Davies on one side and Pauline Black and Gaps Hendrickson on the other. Black and Hendrickson will be celebrating the 30th anniversary of the 'Too Much Pressure' album with a concert on Saturday, November 13, 2010 at the Bloomsbury Ballroom in London.
Posted by Marco On The Bass at 7:23 PM