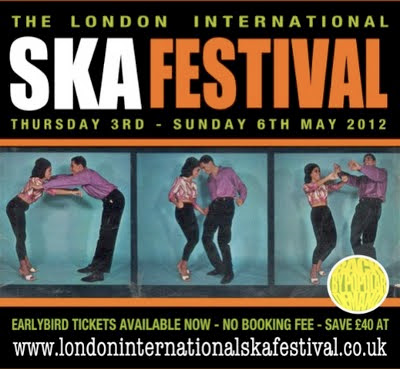 Ska fans around the world rejoice!  Following the huge success of the recent London International Ska Festival his past April, festival organizer Sean Flowerdew has just announced it will become an annual event and that the 2012 version of the four day festival will feature 30 bands and DJs from all over the world across three venues -- The Brixton Academy, The Sheperds Bush Empire and The Islington Academy -- from May 3-6, 2012 in London.  Believe it or not but early bird/discounted priced tickets are already on sale (£99.99 – at a cost savings of £40!).


The line up details will start to follow shortly. If you enjoyed 2011′s festival, 2012 is going to raise the standard even higher! We are currently programming a truly exceptional lineup... so expect some more world exclusives and another world-beating 4 day celebration of SKA in all it's beautiful guises. I can't tell you how excited I am about this.

With a diverse mix of bands and performers, the 2011 edition was a ska lover's dream come true.  My hope is that the 2012 version spreads the love out a bit to include more bands from outside the U.K. and Europe.  I would love to see a few more U.S. bands invited to play (The Forthrights, Green Room Rockers, The Aggrolites) as well as a South American band or two  -- Desorden Publico from Venzuela and Los Fabulosos Cadillacs from Argentina -- come to mind.

In the meantime you can re-live the memories of the 2011 version via a variety of merchandise including a DVD, book and album which can be bought from the 2011 festival online shop (every sale helps towards next years festival!)

You can stay up-to-date with the goings on of the 2012 version via Facebook.
Posted by Marco On The Bass at 4:31 PM

"My hope is that the 2012 version spreads the love out a bit to include more bands from outside the U.K. and Europe. "

My huge battle is I want to bring bands from all around the world to perform at the festival, but the majority of the time any said artist isn't known and won't sell enough tickets to cover their hotels, let alone flights and fee they ask for.

Rest assured though there will be an American band or 2 on the bill... at least one S.American and bands from 3 other continents.

It's going to be amazing.

Thanks very much Sean! First let me say that we are all indebted to you for pulling together the 2011 version of the festival. I'm so happy it was a success and that it will continue. Please take my 2 cents on suggested bands for what it is -- just my 2 cents! I'm just a booster for American bands! Look forward to making it over for the 2012 version!