Help Get The Selecter's New Song Into the Top Of The Charts! - 'Big In The Body, Small In The Mind' Now Available For Download 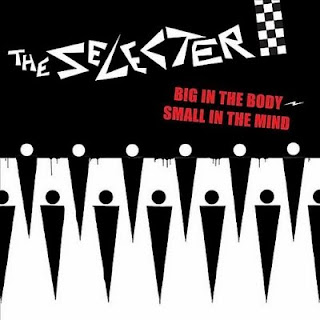 The Selecter was once described as 'conspiring to make dancing the only way to walk.' Thirty one years later, those words still hold true!

The band has just released their first new single 'Big In The Body, Small In The Mind.' Featuring the co-vocals of original singers Pauline Black and Arthur 'Gaps' Hendricksen (and artwork by original Chrysalis Records graphic designer John 'Teflon' Sims), the song is a musical call-to-action to ska fans the world over to embrace and defend the 2-Tone concept of multiculturalism. Musically it's a slice of The Selecter doing what they do best -- mixing ska/rocksteady with a pop sensibility and coupling it with acute social observations on the state of the world right now. Its an homage to Woody Guthrie and a rallying call to everyone who still believes that 2-Tone bands should confront the ugly face of racism, represented globally by right wing groups like the British National Party, Ku Klux Klan, Forza Nuova and the Tea Party.  Watch the official video for the song below:

The band has kicked off a grassroots campaign on Facebook to get the single into the British pop charts and so far they seem to be getting the word out. After just one day, the song is already in the Top 40 of the Amazon.com 'Hot New Release Chart'.  If you love the idea and ethos of 2-tone and are a fan of The Selecter then please consider investing less than a dollar or a pound to buy the single and send a message to the music industry and music press that ska is still alive and kicking! Please show your support!

Amazon U.K. download link
Posted by Marco On The Bass at 8:52 PM

Love the track--and that it's an homage to Woodie "This machine kills fascists" Guthrie!

Can't wait for the vinyl single of this cut!

Very enjoyable song. Much better than I would have predicted.