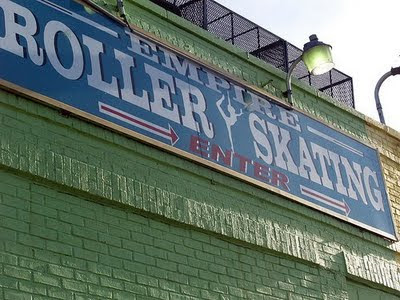 New York has long been the mid-point for reggae up from Jamaica or over from England.  Brooklyn in particular has long been one of the key spiritual homes for reggae outside of Jamaica.  There has always been a large West Indian community in New York City's largest borough. As such, Brooklyn has been the site of many important reggae shows over the last 30 years but none may be as historically important than the 'Vintage Reggae Bash' in Brooklyn sometime in 1983.  The show featured a who's who of legendary reggae artists in their prime including Big Youth, Leroy Sibbles, Ken Boothe, The Blues Busters - Lloyd Campbell and Phillip James, and Max Romeo.

The show was held at the Empire Roller Skating rink in Crown Heights Brooklyn (which sadly was closed in 2007). The 30,000-square-foot venue was a go-to spot for skate-world renegades in the early 70s, and was a de facto community center where teenagers came after school and families spent the weekend. It was actually a perfect place --in the heart of the largest West Indian neighborhood in Brooklyn -- to host such a historically important music event such as this in the early 80's.

The show reveals the diverse artistry of reggae music at the dawn of the 80's and is a stark reminder of the role that New York and Brooklyn in particular played as the birthplace for hip hop and reggae's fertile cross-pollination. Just a few years later the rapper Just-Ice's 1987 single 'Going Way Back' traced the history of hip-hop in New York as far back as the Jamaica-born DJ Kool Herc whose sound system started the genre. Indeed, watching the 'Vintage Reggae Bash' begs the question: What would the musical landscape looked and sounded like if reggae and not hip-hop had become the next big musical wave out of New York?

The concert opens with a true Jamaican veteran, Max Romeo (who moved to New York City in the late 70's). Although Romeo started his career in the ‘60s, he’s probably best known for the tracks 'Wet Dream' in the late 60's and 'War Inna Babylon' from the mid-‘70s. And while no live rendition can match Lee “Scratch” Perry’s original studio production, Romeo's version sounds great in concert. Romeo mixes it up a little bit, too, beginning with the chorus from John Lennon’s 'All We Are Saying Is Give Peace a Chance'.

Ken Boothe is also impressive (his recent appearance at the London International Ska Festival 28 years after this performance shows what a true performer he is). Wearing a sharp white suit, Boothe has a likeable Otis Redding rasp to his voice. He’s also a smooth dancer. He includes the social justice anthem 'Freedom Road' in his set, as well as 'Don’t Want to Say Goodbye', 'Moving Away', and one of his most well-known songs 'Everything I Own' which hit #1 in the UK in 1974.

The high-voiced Leroy Sibbles also makes an impression with his four selections. Sibbles started out with the vocal trio the The Heptones. And while he performs here without the harmonies of his two former mates, he still brings a lot of life to 'Party Time', an old Heptones tune.

The appearance of the Blues Busters reveals just how much history is covered by the entertainers on this stage. Lloyd Campbell and Phillip James got their start in the late-‘50s, (and performed at the 1964 New York World's Fair) and come off like a Jamaican version of Sam & Dave. Dressed in red and white suits, they offer a nice throwback to vintage soul days.

The highlight of the show though is Big Youth. He gets the most video time with six songs presenting the far tougher, more politically rooted sounds of reggae. This approach is exemplified by 'Every Nigger Is a Star', which takes Boris Gardiner's version and places it into an extremely confrontational stance.

Holy crap! What an amazing bill! I wish that I had any idea that it was happening at the time...

I know! The show is really good and its hard to believe it was 28 years ago!

LOVE your blog! Amazing stuff week after week. Please keep it up!

One comment though... I believe that Toronto was actually the mid point for reggae and ska between Jamaica and England.

In the 70's, and early 80's Toronto was referred to (at least around here) as part of "the reggae triangle" Kingston + London + Toronto. Toronto's Kensignton Market, and the Jane/Finch corridor have been hotbeds for reggae artists since I can remember.

The "Jamaica To Toronto..." comp. CD of a few years ago documents the Jamaican musicians who moved to Toronto as early as the mid-to late 60's: http://pitchfork.com/reviews/albums/9220-jamaica-to-toronto-soul-funk-reggae-1967-1974/

Further proof is the fantastic archive of footage created by Toronto-based TV programs: CityPulse News, CityLimits, and The New Music. Some of which is available on Youtube. Growing up here, it feels like reggae artists were always on TV, and playing in the local clubs.

*On a side note: Here is a prime example of some Toronto involvement which has only recently come to light on Youtube: The 1982 Jamaica World Music Festival which was simulcast by Toronto's The New Music. (While this video was put together by a Clash fan - they were only one of a number of acts covered by the broadcast.)

Again, I absolutely LOVE what you're doing. But after a pretty brutal election up here this week - I'm feeling a bit overly nostalgic for the good 'ol days of Hogtown.

Just trying to make sure Toronto gets it's due in the history books.