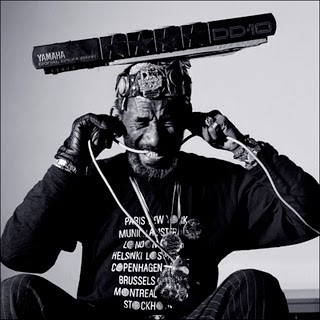 Fans of Lee 'Scratch' Perry are generally quite familiar with the iconic reggae producer/artist's creative output. However, chances are that if you lived outside of Ireland in the early 2000's (2001 to be exact) you might not have known that Perry appeared in a series of groundbreaking and utterly surreal television advertisements for Guinness. Shot in and around Dublin by Zak Ove (son of filmmaker Horace Ove whose 1971 documentary, "Reggae", was the first in depth film on reggae music to ever be produced), the campaign, which broke on July 14, 2001, attracted attention to Perry as much as it did the famous Irish stout.

According to an interview that Jay Pond-Jones the art director for the spot did, the entire process of creating the ad spots was not very different from the way Perry has approached producing and recording music-- completely improvised.


"I researched every interview he'd ever given so I knew his musical history and got into some of his areas. From what he calls outerviews, I saw who he spins out into the outer reaches of language and imagination," says Pond-Jones. "We turned these into areas for scripts and filmed around subjects. He wanted to do one on world peace, so we got him in the bar and set him off talking about world peace. We used the flower market and other simple visuals like the dove. The scripts were not written down."

"One thing I was keen to get within the mix was a balance where advertising can actually do something positive, so I was happy the world peace one got such a great reception from the client," says Pond-Jones.

"As an experience, it was interesting working with someone who is just so creative. He writes continuously and is always looking for things and seems very connected to nature. When we were down on the rocks filming, he was going off between takes and exploring. His mind wants to take stuff on board every time and at every turn over, we got a new take on everything. The scene with the dove flying away after he kisses it was the first one we did. It was like a magic moment that made the hair on the back of the neck stand up. You knew you'd witnessed something quite good."

Director Ove described the spots as surreal visual interpretations of Perry's words. For example, Perry told Ove he meditates while in his tub, so one spot finds him speaking from within his tub in a variety of locations, representing the dub originators mental travels.

The spots have to be seen to be really appreciated. They are a unique instance where I can truly say that art and commerce have merged with magnificent results. Watch and enjoy them all below (hopefully while you enjoy a pint of black gold!). Thanks to Dangerous Minds for the tip!