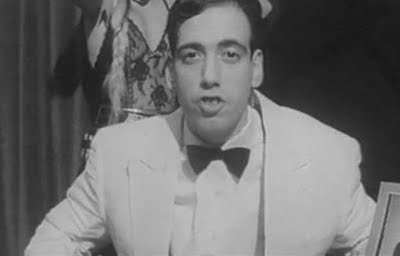 Behold fans of The Clash! The blogosphere has once again uncovered a rare gem!  I present for your viewing pleasure a very rare gangster parody film titled 'Hell W10' (named after the postcode of Notting Hill in London) that Clash frontman Joe Strummer wrote and directed during the summer of 1983 featuring his band mates, while the band was on a break from touring. Its bittersweet to watch, as this is the very last creative project the band worked  on together before Jones was ousted from the band in late 1983.

'Hell W10' is a 50 minute-long, Super-8 silent film that plays like Mean Streets made on a shoestring budget. A tale of gang warfare between a brigade of punks led by bassist Paul Simonon and a bunch of sharp-suited gangsters fronted by guitarist Mick Jones. The film is an amateurish, silly, funny, gory, and fascinating document of the time, made even more interesting as the film was thought lost until a pair of fans found a copy at a garage sale a few years back (the film was later released as part of the Essential Clash DVD collection).

While it's not exactly the kind of film you watch again and again, it's worth viewing at least once for the images of London in the early '80s and the gusto with which the band members throw themselves into their roles -- Jones camps it up like a pantomime villain as pornographer Mr. Socrates, Simonon plays his Jimmy Cliff-channeling rude boy nemesis Earl and Strummer puts in a cameo as a mustachioed crooked cop (prefiguring his later movie work in Alex Cox's 'Straight to Hell' and Jim Jarmusch's 'Mystery Train'). Tony James and Martin Degville who later went on to form Sigue Sigue Sputnik also feature in the film. 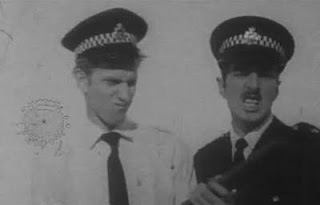 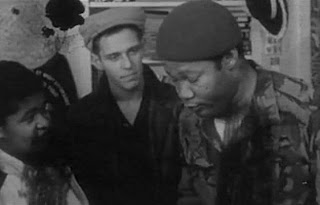 The plot surrounds a man named Earl (Simonon) and a drug-lord/porn director/crime lord named Socrates (Jones). Earl's girlfriend gets involved with Socrates and soon enough Earl becomes the man's number one enemy. Socrates tries to get his goons on Earl's case, especially after he sells a batch of Socrates' x-rated films, but Earl manages to wrangle up a group of his friends to rebel against them.  Hell W10 is no masterpiece. The camera work is sloppy at times and individual scenes last longer than they need to. Still, it’s hard not to enjoy any movie with an all-Clash soundtrack, and I got a huge kick out of watching Mick Jones scowl in his white tuxedo like a silent-film Scarface.

Without further ado I present in its entirety Hell W10:

Wow - I saw a really bad VHS (or possibly betamax) version back in the 80's with the wobbly sound poor quality tapes had then (like watching Clockwork Orange on a 50th generation vhs as it was banned in the UK back then).
Thanks for this - nice to see what it should have looked like. It sounds better than it looks but watching it brought back my childhood.