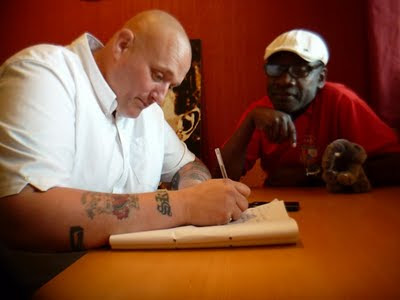 Add Lynval Golding of The Specials to the illustrious list of 2-Tone era musicians (Horace Panter, Neville Staple and Pauline Black) who have written books about their personal and musical experiences playing ska. The guitarist and prime mover behind The Specials successful 3 year reunion which wraps up this fall, is collaborating with Paul 'Willo' Williams author of the definitive history of the band 'You're Wondering Now -- The Specials from Conception to Reunion'.  The two have been meeting together for several months and are in the early stages of mapping out Lynval's story and perspective on the band and his life changing experiences playing music.  The current working title of the book is 'Back In Time'.

While it will more than likely touch on Golding's experiences with The Specials, its sure to explore more personal issues related to his experiences as an child immigrant moving from Jamaica to a pre-multicultural Britain. The memoir may also relate the inside story on the band's improbable reunion in 2008 and the effect and impact that has had on him, his family, his bandmates and fans of the band around the world.

I spoke with Williams about the book writing process he and Golding have recently embarked on.

What prompted Lynval to decide to write a book?
I think Lyn has reached that point in his life where he wanted to look back over at what he had done so far, pay his respects to family and friends that have helped him along the way, get points in his life straight, exorcise a few demons and talk about his love of The Specials and his family.

Are you two collaborating together on the project?
Yes we are.  I was very honored when he approached me as he felt I was the right person to help him. Its a project thats been talked about for about a year or so on an intense level, but he had his mind set on doing the book a couple of years ago. Lyn provides great material and I do the rest! I am doing research as well. Lyn is also photographing lots of things as he goes around which we can use.

Will it be an autobiography or will it focus more on his life as a musician and the band's recent reunion?
Its a mix of all those really.  He is very up on talking about the monumental reunion -- Its an important factor he wants to get down. The story flits from his early days in Jamaica ( this is VERY hard reading - his departure to England will make people shed a tear) to facts about how he got into music. Big influences on his life, but I don't want to be say too much just yet!

Have you started working together on a first draft?
The first draft started back in April and he comes up to my place when he is over in the UK.  Our last session was in August.  I set the recorder going and the man just talks with a passion. There is also the wonders of skype and email. We will probably link up on the tour as well. I am loving putting it together!

Do you have a publisher yet?
No not yet. Its something we haven't really thought about but Lynval will have his own ideas and I have a few contacts so I'm sure we will come to some arrangement with someone.

Any anticipated timing for publication?
No nothing set yet. Obviously Lyn has other stuff to do first! We have thought about schedules but the book will tie in with something very special and personal (no pun intended) that Lyn has up his sleeve but it will be not too far off.  I'm afraid its a case of watch this space at the moment!

Is there a working title?
The working title we have at the moment is 'Back In Time'.  Again, as you will see later down the line, the title will all make sense. Its a labor of love for him. Its a project he wants done right.  He is so passionate about this.

Where do you think Lynval's book fit into the crop of recent 2-Tone themed books by Horace, Neville and Pauline Black?
Well, the good thing I think about this is that it briefly touches on the original Specials story. His idea, and he is right in many respects, is that that particular story has been done -- by Horace, Neville and even myself.  There's nothing more he could add. So this is about the charismatic man under that pork pie hat. A heart on the sleeve moment, but the reunion, of which he has played a huge part, will be a big focus and believe me, it will be worth reading.

So there you have it!  While the band may be embarking on the final tour of their reunion, fans of The Specials and 2-Tone can look forward to reading all about Lynval and his unique perspective and experiences as as musician.  Stay tuned!

Many thanks to Paul 'Willo' Williams for the picture.
Posted by Marco On The Bass at 4:06 PM