The Special AKA Released "Free Nelson Mandela" 29 Years Ago This Month! 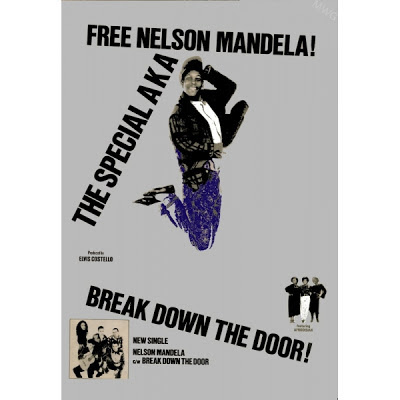 It's hard to fathom that The Special AKA released 'Nelson Mandela' as a single in March 1984! Written by Jerry Dammers for the In The Studio album. The record shot to No.9 on the chart, and Dammers was soon busy organising the Artists Against Apartheid' concert on Clapham Common.

The song is such a touch point of my youth and of my growing political consciousness.  It is also a powerful reminder of the role that music can sometimes play to right immense wrongs, and in this unique case, change the course of world politics for the better.  The single brought the plight of Mandel's imprisonment a to the attention of many for the first time (and was regularly played at divestment protests that took place at my university campus in 1987). If 'Ghost Town' was Dammers greatest commercial success, 'Free Nelson Mandela' was his greatest artistic achievement, although he rarely gets the credit for it he deserves.

Below is the the band's only public performance of the song on Top Of The Pops in early April 1984 and the only one featuring vocalist Stan Campbell, who quit the band shortly before the release of the single and who had to be talked into making this one appearance to promote the song.

Dammers told Uncut magazine January 2010 the story of the song:


"It was a bit like the end of The Specials. When 'Nelson Mandela' came along, the band was falling to pieces. But I had this idea that I knew was really important, like 'Ghost Town.' so there was that desperation to get it down on tape, before the thing disintegrated completely. I wrote the tune to 'Nelson Mandela' before the lyrics. By that time, especially in London, rock music was dead. It was all electro-pop, hip hop, jazz or Latin. And also, Joe Hagen had this African club at Gossip's. I was inspired by the spirit and positivity of that African music. I was trying to get in a few Latin rhythms, but also township jazz. It was a very simple melody, three notes: C,A and E. That meant the public could sing it. And then I went to Nelson Mandela's 65th birthday party at Alexandra Palace. I'd never really heard of him, to be honest. Various bands sang about him, particularly Julian Bahula. And that's where I had the idea to put this message into this tune I had hanging around."

Below is a clip of the band performing the song on The Tube in 1984 with Elvis Costello, Dave Wakeling, Ranking Roger and Rhoda Dakar on lead vocals for the departed Campbell.

Below is a rare clip from the 1984 Channel 4 TV program Play At Home documentary featuring the first run-through rehearsal of of the song with an introduction by Jerry Dammers ("basically written for this program").