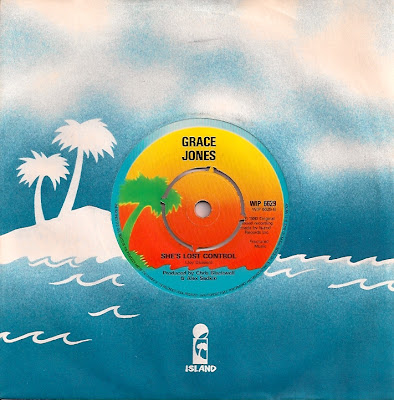 I've been in a serious cover song phase lately as part of a new music project that I'm part of (more on that later).  As such, I've been really listening to the ways that songs can be radically altered and reinterpreted.  In some extreme and unusual cases, something with completely new musical DNA can be conjured from the original source.

The convergence of punk and reggae and punk and ska in the late 70's and early 80's resulted in some significant musical experiments in which punks and post-punk bands incorporated the sound of reggae and dub in particular: Most of the key 2-Tone bands played covers of 60's ska songs. The Clash played reggae covers and collaborated with Mikey Dread. The Slits worked with reggae producer Dennis Bovell (who invented Lovers Rock) and The Ruts who recorded the reggae song 'Jah War' releasing it on UK reggae band Misty In Roots record label.

While the punk adoption of reggae covers soon became a regular musical occurrence, reggae versions of punk and post-punk material was more rare (save Bob Marley's ode Punky Reggae Party).   However,  one of the most radical revisions ever had to be Grace Jones' rendition of the Joy Division classic She's Lost Control released in 1980.

Disillusioned with disco, Jones, on the urging of Island Records boss Chris  Blackwell, had travelled to Compass Point studio in the Bahama's to find a new direction. Blackwell intended for Jones to make a record with "...a harsh sound that was heavy with Jamaican rhythm." Backed by the Compass Point All Stars who included fellow Jamaican rhythm kings Sly Dunbar and Robbie Shakespeare, the result was the Warm Leatherette album on which she reinterpreted songs by The Pretenders, Roxy Music, Tom Petty and The Normal amongst others to devastatingly original effect. Though her idiosyncratic re-invention of Ian Curtis's menacing original was only released as a B-side to her very dark reggae interpretation of The Pretenders Private Life (which also surpasses the original), her version of the Joy Division classic pulses and vibrates like an hysterical Black Uhuru backing track. Give a listen below.

The Jones version of the song has inspired many surprisingly academic interpretations including this one:


"In Joy Division’s version, ‘She’s Lost Control’ is one of rock’s most explicit encounters with death drive: it confronts the ‘edge of no escape’, petil mals as petit morts. Where Curtis sounds already-dead, fatalistically mortified, capable of neither screaming nor laughing, Jones sounds crazed, deranged, in some state that, neither agonized nor ecstatic, is some sublime bitches’ brew of the two; jouissance, precisely. The screams and the laughter seem to come from some other place, a dread zone from which Jones has returned, but only partially. Is it the laughter of one who has passed through death or the scream of a machine that is coming to life? Jones changes the words, repudiates Curtis’ disavowal ‘I’ve lost control’, she sings, repeating her impossible identification again, paradoxically asserting her subjectivity at the very moment of its erasure."

A key distinction is the way Jones takes a masculine song about epilepsy and turns it into a song from a woman's point of view ("I've Lost Control" vs "She's Lost Control") is quite striking, turning the meaning of the song on its head. The screeching car tires are a particularly subtle but powerful sound effect that also push the song into a whole new place.
Posted by Marco On The Bass at 5:20 PM

I was told that Jones did not have permission to cover this song, but went ahead anyway. As a result all early editions were recalled. Is this true? I was told that two of these early editions had already been shipped to South Africa. I bought one of them. The cover is a generic Island sleeve which has an image of a vinyl album.