The Next Electric Avenue Show: Beat Brigade, Across The Aisle and Rude Boy George on Saturday, April 13, 2013 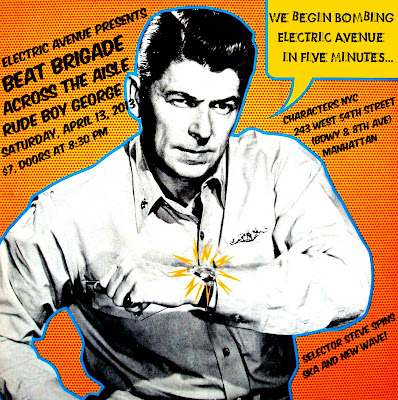 The next Electric Avenue show will kick off on Saturday, April 13, 2013 at Characters NYC in the heart of midtown Manhattan with a headlining set by early 80's NYC ska stalwarts the Beat Brigade (who will be unveiling songs from their new album), pop/punk/ska upstarts Across The Aisle and the debut of Rude Boy George, which is a new musical project that I am part of with other members of my band Bigger Thomas, The Toasters and Across The Aisle, that performs ska, reggae and rocksteady versions of 80's new wave songs. Doors are at 8:30 pm and the cover is a super low $7!

Check out videos of each band below including Beat Brigade performing "Armageddon Beat," Across The Aisle with Coolie Ranx performing "Beer Song" and Rude Boy George performing a rocksteady version of the INXS new wave classic "Don't Change."

Electric Avenue is a partnership between myself and my fellow New York City ska blogging pal Steve Shafer (Duff Guide To Ska who also happens to be a member of Rude Boy George). We have teamed up to present monthly ska and reggae shows at Characters NYC, a midtown Manhattan Irish pub (243 West 54th Street, between Broadway and 8th Avenue in Manhattan) with a big back room ideally suited for live music.

Since last fall, we've been undertaking this labor of love--doing it for free (the bands split 100% of the cover, nobody else takes a cut)--to support ska bands and their fans, and have some fun in the process. Electric Avenue shows already have featured some of the best acts on the Northeastern U.S. ska scene, including King Django (NJ), The Snails (Philadelphia), The Frightnrs (Brooklyn), Destroy Babylon (Massachusetts), Bigger Thomas (NY/NJ), Beat Brigade (NY), Doomsday! (NY), Los Skarronerros (Brooklyn), The Pandemics (Long Island), The Scofflaws (Long Island), The Bullbuckers (Wilmington, DE), The Reggay Lords (Brooklyn), The Copacetics (Providence, RI) and The Rudie Crew (NY) and The Royal Swindle (New Haven, CT).

The Facebook Electric Avenue event page can be found here. And take a moment to "like" the Electric Avenue FB page, so you keep up on our shows.
Posted by Marco On The Bass at 8:35 AM