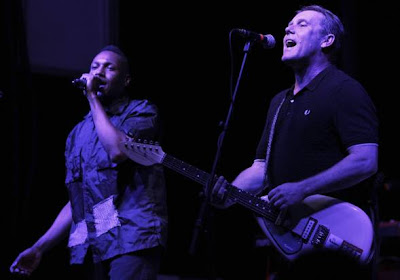 If you have caught Dave Wakeling's version of The English Beat during any of their coast-to-coast U.S. tours over the last five years, then you no doubt have had the pleasure of enjoying the singing, toasting and stage moves of the band's resident toaster and MC, Antonee First Class. He complements Wakeling's crooning with crisp toasts and shines on his freestyle chats and his own songs like the track  2-Tone, which the band should really record and release.

Antonee (the son of 70's/80's reggae artist Militant Barry) has just released his debut single Who You Are, which is a departure from the music he performs with Wakeling and company.  Calling it an an adult contemporary reggae song in the vein of UB40 or Beres Hammond, Antonee has tapped the talents of former English Beat bassist Wayne Lothian (Special Beat, General Public) to produce and arrange the track and Lynval Golding of The Specials to play guitar.  The song also features Grammy-winning composer/conductor Paul Buckmaster on strings

Stream the track below and visit iTunes of Amazon.com to purchase a copy of the song.

For more information visit www.antonee.net.
Posted by Marco On The Bass at 9:35 PM