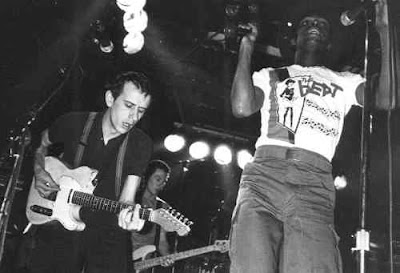 Whenever one thinks of The Beat, its generally Dave Wakeling and Ranking Roger who come to mind. As the front men, its only natural that they would be seen as mouthpieces for the band, However, when The Beat first started, they were quite democratic about who would show up to do interviews. In fact, they never confirmed who would appear so that the every member of the band was seen as a contributor. And though it was Wakleing and Ranking Roger who captured the lion share of the attention, I was always more intrigued by the band members in the back, namely guitarist Andy Cox and the shuffling bassist David Steele who were rarely heard from.

When The Beat split in 1983, it came as a surprise to Cox and Steele. The first time they realized that the group's vocalists had gone off to form a group without them was when their accountant phoned to finalize the divorce. While the defectors had formed General Public, Cox and Steele set about creating something new of their own. Apart from not wanting to repeat the mistakes of The Beat, and with a vague notion of adding both jazz and soul to The Beat's ska roots and incorporating a vocalist who’d be both distinctive and sympathetic to those influences, there was no definitive blue-print for their evolution. Cox and Steele auditioned more than 500 potential front men, until so frustrated by such a disheartening process, they abandoned it in order to search for one particular singer named Roland Gift they’d remembered fronting Hull ska punks The Akrylykz, who had supported most of the key 2 Tone/ska revival acts including The Beat. The rest is history and Fine Young Cannibals went on to score #1's on both sides of the Atlantic.

The Cannibals dissolved in 1996 after a nearly 10-year run together with each member going on to work solo. Steele became an in-demand producer and launched his retro-soul and R&B duo Fried. Gift released a solo record and has lately been performing with other musicians as the Fine Young Cannibals in the UK. However, Cox has taken an all together different musical road post-Beat and post-FYC. 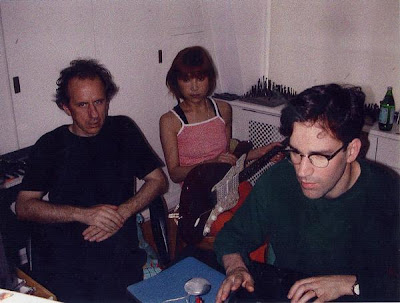 Often marveled for his imaginative reconstructions of Jamaican ska and American soul, Cox's latest work is skewed with an intriguing partner -- Yukari Fujiu - a young, underground Japanese singer. The story of how Cribabi came together as a band is truly the stuff of folklore: Yukari bought a learn-to-speak-English tape with a monologue about guitars that was performed by Andy. A while later, she coincidentally met him in London while she was working in the same building that his Lo Fi recording studio is housed in. They started talking, then they shared some ideas, did a little recording, and subsequently decided to embark on an album project. Yukari returned to Tokyo while Andy stayed in London, and their debut album titled "Volume: was recorded in pieces half a world apart with the tracks traded via email, for a cost of roughly £300.

While Cox is just as well known for his traditional musical projects, he is now working on more experimental projects that include using bicycles to make music. Yes bicycles! (have a look at the picture below of a bicycle that Cox outfitted as an instrument). You can listen to the podcast of the Bicycle Show that Cox appeared on in early 2007 to discuss bicycle music below:

Andy Cox on The Bike Show
(If you have trouble getting the link below to work directly, try copying and pasting the URL address directly into your browser and it should play)

Finally, here is a long lost snippet of an interview Cox conducted with a U.S, DJ in the early 1980's when he was with The Beat about how the band got started and how they connected with The Selecter and The Specials. Its quite refreshing to hear Cox's broad Midlands accent. The interview lasts about 3 minutes and 30 seconds and also includes Ranking Roger.

Radio Interview with Andy Cox and Ranking Roger (If you have trouble getting the link below to work directly, try copying and pasting the URL address directly it into your browser and it should play)
Posted by Marco On The Bass at 3:29 PM