Dance Craze: The Magazine Of The Film! 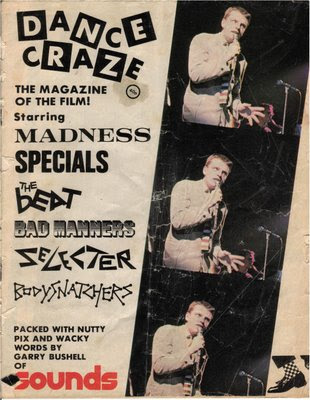 So you've seen Dance Craze the movie but have you read Dance Craze the magazine? Unless you lived in the UK in 1981 or are a 2-Tone memorabilia fanatic and own a copy, chances are that many of you have not seen this 32-page gem. And it only cost 40p when it was on the newsstand!
According to the 2-Tone Info web site, this magazine was one of two magazines published to accompany the film. Of the 2 magazines which were issued to coincide with the release of Dance Craze this one is by far the most informative. Written by then Sounds journalist, Garry Bushell, it offers an insight to each of the bands featured in film, along with a brief history of ska and a positive write up on skinheads.
Although he recalls an early encounter of The Specials, who were supporting The Clash at the time, the author admits he wasn’t initially that impressed with the embryonic fusion of punk and reggae. This was soon to change as Bushell was one of the first journalists to pick up on the 2 Tone phenomenon and it is obvious from reading the magazine that he was also a huge fan of both the label and its achievements. A great section on Bad Manners sees Buster recall how his overactive bowels put an end to his famous white boiler suit and how Chris Foreman from Madness once challenged the fat man to a Big Mac eating contest. Also included in the magazine are discographies (which were up to date at the time of publishing) of each of the featured bands plus press ads for the likes of ‘More Specials’ and The Congos album ‘Heart of the Congos’, released on The Beat’s Go-Feet Records.
Many thanks to Judge Fred at The Beef, The Original and The Cover for this great piece of 2-Tone history. Enjoy the read!
Here is the download of the magazine in pdf format:
Dance Craze Magazine
Posted by Marco On The Bass at 4:09 PM

Wow, thanks for reminding me about this little gem. I was lucky enough to find one of these in 1982 at a record store on Melrose Ave in Hollywood. I still have it today, I dug it out of a box full of 2 tone stuff from my youth. This magazine and my Dance Craze album changed my life FOREVER! Great blog!!