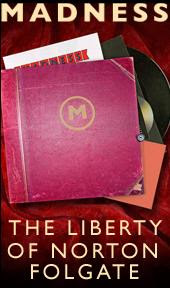 At last! Good news on the release of the new Madness album. The band have finally committed to a release date! The newly re-launched Madness Web site announced yesterday that 'The Liberty of Norton Folgate' will be available as a 'Limited Edition Luxury box set' with a release date of March 2, 2009. The even better news is that those among you who commit to the purchase of the box set at a cost of £40 will be able to digitally download nearly half of the album starting this Monday December 22, 2008. Sounds like some Madness fans are going to have a very 'Nutty' Christmas.

Here's the full inside scoop from the good folks at Madness Central who had a chat on the phone with Madness guitarist Chris Foreman who explained how the process will work. Anyone who pre-orders the Norton Folgate box set will be able to download 12 of the 23 songs recorded for the project this coming Monday. The download is meant to be a sampler of the album, and a reward for fans who pony up the cash early for the box set.

So what are the 12 songs? I was able to get some inside information ahead of the release that the songs available for download will be:

A quick word on the “limited edition” moniker associated with the Norton Folgate box set: Foreman believes the initial pressing is 5,000, mainly because of the economy of scale associated with manufacturing the costly box itself. However, when the band sell off these 5,000 copies, another 5,000 will be pressed. He assured Madness Central that fans don't need to worry about the edition being so limited that it will limit access to purchase.

So with this announcement, its clear that the band have decided to release the album on their own, without any record company support. They look to be taking a page out of Radiohead's recent digital release of 'In Rainbows' which was also done without a record company. Personally I think its a smart strategy and should help them meet the pent up demand among hardcore fans who have been clamoring for the album while not having to deal with the headaches associated with negotiating a one-off deal with a record label.

A recent deal with the Power Amp Music Fund who have signed the band to a long term deal seems to have kick started the release of the record. According to a press release distributed earlier this week, “The Power Amp Music Fund is an innovative investment vehicle offering the opportunity to invest in a diversified portfolio of UK music talent. The Fund uses an artist-centric development model that brings the source and destination of music closer together and generates enhanced returns for artists and investors. By investing directly in artists’ careers, investors participate in all revenues available: recording; publishing; live; merchandising; and alternative (digital, branding etc,). The model offers an effective route into an industry with strong future revenue potential. Power Amp’s management team has the advantage of employing a combination of traditional investment managers together with professional music managers.”

I will probably buy the box set, if only to satisfy my curiosity to hear the 12 songs in all their studio recorded glory. However, a word of caution for U.S. fans. The total cost of the box set with shipping (which includes a CD and vinyl along with membership in 'M' which provide access to all sorts of special goodies) comes to a whopping $80. I think its worth it. What about you?
Posted by Marco On The Bass at 10:16 AM

Nicely done, Marc. With all the dispersed information flying about, you've drafted up a concise and articulate blog drawing it all together.