Tour Dates for The Specials Sell Out in Minutes - Jerry Dammers slams the tour as a "Takeover, Rather Than A Reunion" 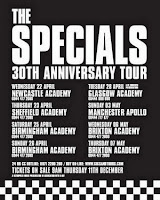 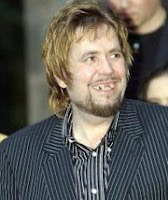 Did you get your tickets for The Specials reunion tour of the UK next spring? Me neither. Apparently they sold out in minutes. According to today's Birmingham Post, the two shows there sold out in 4 minutes! 4 minutes! Amazing!

You and I aren't the only ones who won't be seeing the shows. Jerry Dammers won't be at any of them either. Jerry slammed the tour and let his feelings about this be known in a statement released by his management. It isn't pretty.

Dammers claims there has been little communication with his former bandmates. And he says that he has lawyers' letters from the other members insisting that he is not to speak to any of them. In a statement issued through his management, he describes the tour as a "takeover, rather than a reunion."

The statement further read: "Jerry was not invited to take part in this proposed tour, or even told about it. "He also has to say that claims that 'the door is still open' to him fail to mention that Jerry has been driven out every time he has attempted to get involved over the last year. He also wonders why this appears in the newspaper when former bandmates have his phone number?

"Jerry does not wish to go into too much detail at this point, except to say that for over 25 years he had dreamed that his former bandmates might come back one day, and was deeply shocked to find that when they did, for some of them, it was apparently to kick him out.

"A meeting was called to which Jerry was not invited. Jerry turned up anyway and played the music he had started recording, and suggested starting serious rehearsals, but was subjected to a severe dressing down from people who had barely spoken to him in 25 years.

"Apart from the recording, Jerry wanted to try and aim for a proper reunion and 30th anniversary celebration, including [performing] the best part of both Specials albums, 'The Ghost Town' EP and a small amount of new material, in proper concerts, in venues worthy of the band's status and legacy.

"Jerry sees this whole thing as a takeover, rather than a proper reunion... At the moment this is not the proud reunion and 30th anniversary celebration Jerry had hoped for."

As always visit The Specials.com community forum for the real inside story.

Finally, you can read more coverage about the unfolding drama here:

NME
The Guardian
InTheNews.co.uk
Posted by Marco On The Bass at 10:59 AM