Babylon - The First British Movie About Reggae Has Been Restored & Remastered 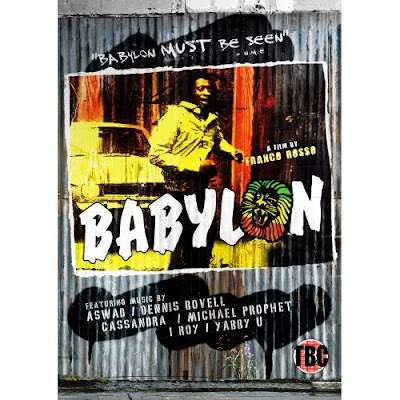 The MC in my band is named Roy Radics and he hails from North London. When I ask him to tell me what it was like for him to grow up as a young black youth in London during the Thatcher years, he always tells me I have to watch the movie "Babylon". He says that the movie comes as close as possible to painting the picture of what it was like to be young, black and a fan of Reggae soundsystems (Roy was a follower of Saxon). Until very recently the movie was out of print and dubbed copies were passed from person to person. The movie was also shown periodically on TV in the UK, so that was also a source of copies floating around. It has now been remastered and remixed and is now available finally as a DVD.
For the uninitiated, 'Babylon' is a dramatic story set in South London in 1980 at the beginning of the Thatcher era, involving two competing reggae sound systems, that also touches on racism, fanaticism, unemployment and false accusations. One could call this a reggae Quadrophenia (it was co-written by Quadrophenia movie scribe Martin Stellman and does have more than the odd similarity in tale and tone). But Babylon is a very different movie. It's a movie with more realism, it's a movie with more bite and it's a movie that captures a unique moment in time. The movie includes some great performances from Brinsley Forde (of Aswad) as Blue the main character, Karl Howman (as 'white boy' crew member Ronnie) and Quadrophenia's Trevor Laird as Beefy. 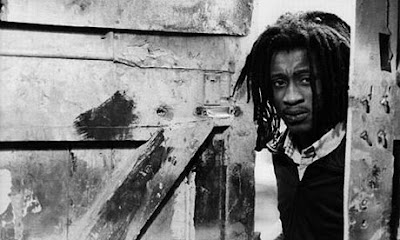 Here is a great recap of the movie from a recent article in The Guardian this past October that heralded the film's re-release: Brixton, 1979. Fat Larry's record shop. Reggae soundsystem wannabes Ital Lion are trying to strike a deal. Days before their Christmas showdown with Jah Shaka's soundsystem, the crew are looking for the right track. Two tunes are given an airing on a reel-to-reel tape recorder. "Exclusive, straight from J to me, pre-release," says Fat Larry. Dreadhead sneers, dismissing the first track as "prewar." An offer is made for the second. Dreadhead pulls a melon from a brown paper bag. It's followed by a telephone directory-sized bag of weed. Then a couple of £10 notes. Unimpressed, Fat Larry caves in when the Ital guys begin leaving, but demands Dreadhead's pendant as part of the deal. Melon in hand, Ital Lion are satisfied that the conscious Warrior Charge is the tune that will shut Jah Shaka down.

Warrior Charge was written for the film Babylon by British reggae band Aswad. Revolving around south London's soundsystems, Babylon was the first British non-documentary to centre on reggae. Former child actor and Aswad member Brinsley Forde is the alienated Blue, a car mechanic by day and toaster by night. In the lead up to the soundclash with Jah Shaka, the tensions in Blue's world increase: racism, a two-timing girlfriend, family problems, peer pressure and police brutality.Sharing the then-recent Scum's brutal neo-realism, Babylon is a unique musical time capsule.

A few whites, like the Clash and the film's Ronnie (played by Karl Howman of Brush Strokes fame), might have ventured into the half-lit dancehalls, but scriptwriter and director Franco Rosso knew exactly what he wanted to portray. As the editor of Horace Ové's seminal 1970 documentary Reggae (why isn't this out on DVD?) and director of the BBC's Lynton Kwesi Johnson documentary, Dread Beat An' Blood, he was the only British film-maker with a track record in covering reggae. With future Quadraphenia screenwriter Martin Stellman, he'd conceived Babylon as a BBC TV play in 1975. The BBC passed and it took another four years to get funding. Rosso and Stellman were determined to capture the scene in the raw and took their cameras into south London's smoke-filled reggae hideouts. The footage of the righteous Jah Shaka is priceless. Babylon couldn't have been anything but authentic.

"It was great to have a script that was real, even though someone in the film said to me, 'You can't be dread and be an actor,'" recalls Brinsley Forde, with a laugh. "It is accurate, the reality of the soundsystem. But how does this little soundsystem go against Jah Shaka? They have to make this amazing dub! To this day you can go to a Jah Shaka show and that is what you will see. You get the soundsystem in its natural form."

Here is the trailer to the movie which features the great song "Warrior Charge" by Aswad:

Here is a another clip featuring a performance by Johnie Clarke:


You can purchase a copy of the DVD at Amazon.com in the UK.
Here is the tracklisting and download for the movie soundtrack: