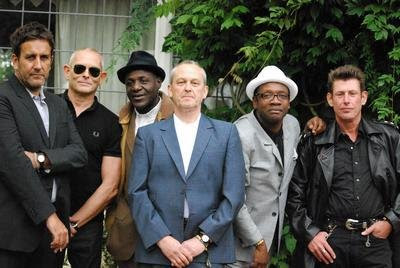 It's really happening! To celebrate their 30th anniversary in 2009, The Specials have announced an 8-date UK tour for next April and May.

The tickets go on sale December 11th and will be priced at £32.50 in advance except London which will be £35. They are expected to sell out quickly. The dates are below. For more information visit: http://www.gigsandtours.com/
Here is a story from today's NME about the tour annoucment which includes an interview with Terry Hall. It appears that Jerry is not part of the tour but that the door remains open for him to join.

22 April NEWCASTLE, Academy
23 April SHEFFIELD, Academy
25 April BIRMINGHAM, Academy
26 April BIRMINGHAM, Academy
28 April GLASGOW, Academy
3 May MANCHESTER, Apollo
6 May LONDON, Brixton Academy
7 May LONDON, Brixton Academy
Here is the press release that was distributed today by the band:
ISSUED TODAY BY THE SPECIALS MANAGEMENT TEAM THE SPECIALS
"...We are proud to announce that 2009 will see the live return of Coventry’s finest, The Specials. One of the most important bands in the history of popular music and recognised as one of the greatest live bands the world has ever seen have been the subject of continuous rumours and demands for their reformation since their split in 1981.
It would be impossible to overstate the importance of The Specials to the UK music scene. Despite a brief career, the Coventry band lit up the late 70’s like a comet, their melding of punk and ska creating the 2-tone sound that is still today is held up as an influence by bands across the world. Now, thirty years since the release of their debut single, ‘Gangsters’, The Specials will take to the road for a UK tour starting in April.
Over two studio albums, The Specials scored eight top ten singles, including two number ones for the ‘Too Much Too Young’ live EP and the era defining ‘Ghost Town’, two Top 5 albums and spawned a retrospective list of compilation and live albums from official releases to much sought after bootlegs. The band were rightly regarded as the starting point of the ska scene that swept the UK through 1978 and, in many ways, were emblematic of their times, their songs dealing with the confusion of a country in industrial decline whilst struggling to come to terms with multi-culturalism and a new creed which became known as Thatcherism. Their re-emergence into a Britain teetering on the edge of recession and still plagued by the same divisions and problems that they so memorably highlighted in ‘Ghost Town’ could not seem more apt, the songs from ‘The Specials’ and ‘More Specials’ seeming as relevant today as they did 30 years ago.
“nothing ever change” Do Nothing – The Specials
Posted by Marco On The Bass at 11:12 AM