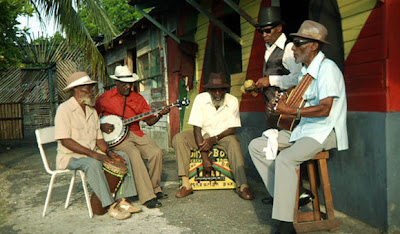 I love a great comeback story. And I love a comeback story even better when its well deserved. If any band has finally earned their time in the sun, its The Jolly Boys , who are among the best known original purveyors of mento, the indigenous folk music of Jamaica that pre-dates ska, rocksteady and reggae.

Mento typically features acoustic instruments, such as acoustic guitar, banjo, hand drums, and the rhumba box that carries the bass part of the music. Mento music had its beginnings in Jamaica in the 19th century, and was a unique fusion of African and European musical traditions. It wasn't until the early 1950s that true mento recordings first began to appear on 78 RPM discs. The 1950's was mento’s golden age, as a variety of artists recorded mento songs in an assortment of rhythms and styles. It was the peak of mento's creativity and popularity in Jamaica and helped to give birth to the island's fledgling recording industry. 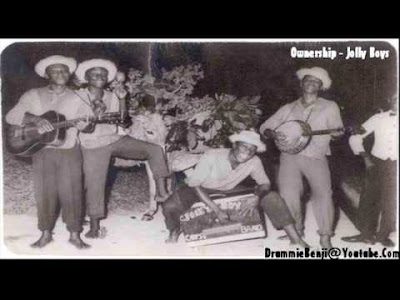 The Jolly Boys were the house band for Hollywood legend Errol Flynn who hosted huge parties at an estate he owned in Port Antonio, Jamaica in the 1950's. Flynn is responsible for the band's name as well, as he was moved by their upbeat songs about drinking, work and women. The Jolly Boys used their house band to the Hollywood elite status to launch a career that has lasted nearly 50 years. While they have endured their share of ups and downs (more downs sadly) the Jolly Boys have become the most recognizable face of mento in the world. Below is a short promo film on the history of the band that helps put their musical odyssey in perspective.

Now all in their 70's and 80's the band is enjoying a resurgence thanks to a UK music producer named John Baker. He's helping to revive and reinvigorate the band by positioning them as Jamaica's Buena Vista Social Club with a twist. He's steered them towards an updated sound called 'Modern Mento' with a new album called 'Great Expectation' that includes covers of songs by The Clash, Amy Winehouse, New Order, Lou Reed, Iggy Pop and The Doors among others. The UK media has been lapping it up with long profiles in both The Telegraph and The Guardian which have helped promote a UK summer tour.

Here are videos of the band performing Winhouse's 'Rehab' (she is a fan of the band and loves their version) as well as version of New Order's 'Blue Monday' which takes on a whole new life as a mento song.


The band is offering a free download of the song 'Iron Bar' on their Web site. According to the band's Web site, it is one of mento’s oldest and most beloved songs. A rude song about a drunken domestic mix up, it was once commonly performed by road workers and farmers as a 'digging song.' Its many recorded versions have made it an enduring mento classic. You can get it here.

The Jolly Boys’ album 'Great Expectations’ will be released on September 20th. They are about to embark on a UK tour and can be seen live at Cambridge Folk Festival this Sunday August 1st, Bush Hall, London, on Tuesday August 3rd and then at the Big Chill Festival on August 8th. More information is available at their Web site and on their Facebook page.
Posted by Marco On The Bass at 7:24 AM

Awesome! Thanks for sharing.

Hello. Very nice site continued in the information. I really like The Jolly Boys. I would add that the song "Rehab" is authored by Amy Winehouse, but Noel Coward, 1934