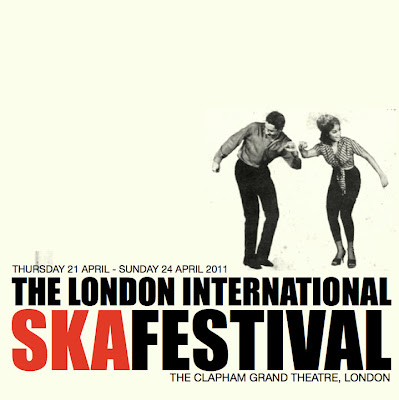 The London International Ska Festival is very quickly positioning itself to be the most significant ska festival in many years. To that end, festival organizers have just announced Dave Wakeling's U.S. version of The Beat (known as The English Beat) as the first of four headliners who will cap off each of the four night's performances from April 21st to April 24th. Interestingly, Wakeling's last London performance was a sold out show at The Royal Festival Hall in 2004 which was organized by Ranking Roger's version of The Beat around Wakeling's visit for the failed VH1 'Band's Reunited' TV show about The English Beat.
The festival is the brainchild of Sean Flowerdew of Pama International who also helped organize the original festival 22 years ago at The Fridge in Brixton which featured Laurel Aitken, Bad Manners, Potato 5, The Loafers, Hotknives, The Deltones, Napolean Solo, The Braces, Capone and The Bullets and Skin Deep. Flowerdew (who recently announced that Pama International would be going on hiatus) has smartly reformed his original 80's UK ska band The Loafers to perform a one-off show during the festival. Other announced bands include my personal favorites Bim Skala Bim (who recently reunited for a series of shows - their first in 10 years) as well as 80's ska mainstays Napoleon Solo and Maroon Town
So far Flowerdew has deftly avoided the inevitable Beat band politics that are raised whenever Wakeling and Ranking Roger come within a few miles of one another. In answer to the question about why Wakeling's band and not Roger's got the invite, he posted the following on the Festival Facebook page: One of our aims with the festival is to bring bands to the UK that people can't see every month/week. I certainly applaud Rankin Roger and Everett Morton for what they've done with The Beat in the UK, but to make our festival a very special event we are inviting fantastic foreign bands that normally people don't get the opportunity to see perform in London. We had to have somebody representing the 2 Tone era, and Dave & his band were the one artist we could think of that hasn't performed here for years. He has been touring USA for the last 3 decades as the English Beat, and we are delighted to be bringing him to the UK. Personally I think its a great choice and will give the mostly British audience a chance to experience the solid show that Wakeling and his talented band have been consistently performing here in the States for the last five years.
In honor of Flowerdew and the The Loafers, below are two videos of the band performing 'The Undertaker' and 'Too Late Rudy' in their prime over 22 years ago:

With three headlining spots still open, who else do you think will get the invite? I have a hunch that another American band may get a nod. Perhaps The Aggrolites or even Hepcat. Let me know who you would like to see. In the meantime I will keep posting headliner updates.
Posted by Marco On The Bass at 8:09 AM

I could imagine a Japanese band as a headliner.

Not knowing whether the Ska Flames are still active: To have them would be something.

Or what about an Indonesian band? There they seem to have a very active Ska scene. That would add to the international expectations.

The line-up announcements have been brilliant until now. Can't wait to hear more.

Hey Marc, are you planning to attend?

Andrew and I, who met up with you at the BB Kings Show after The Specials played NYC have preordered already.

I saw Andrew post on their FB page the other day suggesting Tokyo Ska Paradise Orchestra, who knows maybe previous poster Joe is on to something. In the name of making the bill international, maybe they could add Los Fabulosos Caddillacs too.

I did see a post on their FB page from them saying it was unlikely The Specials would be on the bill which seems ridiculous based on them being the biggest ska band to get back together and hit the road ever.

I'm not thrilled with the choice of Dave Wakeling's English Beat, mostly because I saw them here recently a few times, and Bad Manners was the better band on that bill by a lot.

Thanks for keeping us all informed!
MC (Rick)

Of course, totally psyched for Bim. We saw them open for Bosstones last winter with Jackie doing a few songs and they're as great as ever.

Hi Marc
Many thanks for the coverage you're giving The London International Ska Festival. It truly is appreciated.

To answer Rick regarding The Specials involvement. Of course we'd love to have them and/or Madness on the bill. And of course they are the biggest ska related bands touring, but that's where any problem would arise.

The Clapham Grand is a 1250 capacity venue. The Specials and Madness could sell that out by themselves many times over. We simply could pay them what they get elsewhere.

We do however hope that we can get both bands, or members from those bands involved somehow. They obviously have had a huge part to play in the history of ska.

As for the unfilled headline slots. We have some amzing names that and some world exclusives, so once it's all contracted we will announce.

All the best
Sean

Sorry typing to quickly there... I meant to say... we simply COULDN'T pay what The Specials and/or Madness what they'd ask for.

My wishlist would include the Equators and the Untouchables with the lineup from the their 1984 ep.

Hopefully the fans that aren't able to make it to the festival can pay to see it streamed live or get it on dvd.

we will be making a documentary of the whole event

Thanks for posting Sean, and Bim is worth the cost of the tickets, and the flight to London. That and I do enjoy a good pasty now and again.

Not sure if anybody's mentioned this, but there's a pretty good metro-NYC ska band called Bigger Thomas that puts on a solid show. I bet Marc could help you get in touch with them :)